Posted on Last updated: April 1, 2021 By: Author Janice and George

Maybe even dance the night away at a “silent disco” in a neon-lit ice bar?

The best river cruises have evolved by leaps and bounds over the years to cater to different guests’ tastes.

Several river cruise lines pack bikes on their boats for cycling cruises where you go pedaling around the countryside.

Some river cruises are ultra-luxurious, like Crystal River Cruises (think all-suite butler service and music concerts in palaces and monasteries).

Under 45? Got you covered too.

And in 2019, the Amadeus Star from Amadeus River Cruises also set sail.

It woos millennial cruisers with yoga and a social media “celebrity influencer” on each cruise.

Beyond Europe – There’s a whole world of river cruises!

One of the best European river cruises?

Claude Monet was clickety-clacking on a train through the quaint village of Giverny when he spotted a charming two-storey house through the window. He instantly fell in love with its pink crushed-brick façade and jaunty green shutters – and moved in.

Here he gardened and painted, and in time created his celebrated water-garden. It served as the inspiration for his series of masterpiece Impressionist paintings on water lilies.

For some 40 years (until his death in 1926), Monet continued to live and paint in this enchanting little slice of Normandy.

We too were enchanted by Giverny when cruising the Seine River – one of the best river cruises in the world for a destination-rich itinerary.

A world of river cruises beyond Europe

When you think “river cruise,” Europe probably springs to mind first. Europe is, in fact, the biggest destination for river cruising.

But it’s also possible to drift through the countryside on inland waterways in Egypt (and elsewhere in Africa), China, the U.S., India, the Far East and South America.

You can sail on everything from a six-person luxury barge to a floating river hotel.

We’ve been fortunate to enjoy several of the world’s best river cruises – in China, Egypt (twice), Namibia, Myanmar (twice) and our most recent, in France on the Seine River (with Scenic Cruises).

Before our Seine trip, we delighted in an eight-night Belmond cruise in Myanmar on the Ayeyarwady (Irrawaddy) River.

It served up a heady mix of champagne cocktail parties, bouncy ox-cart rides and stupendous brick-red and golden pagodas.

And a few years back in Egypt, we were agape upon seeing all the tombs and temples along the Nile River that have wowed visitors for centuries.

Indeed, ever since our first river cruise, we’ve been hooked on meandering slowly along rivers, soaking up some of the world’s most historic and cultural sights.

We’re now searching around for what we’d like to experience next.

How amazing would it be to spot elusive Indian tigers and rhinos on a Brahmaputra River cruise in India! Or maybe we could explore the Mekong River in Cambodia and Vietnam?

Tasting port along Portugal’s river sounds enticing too, as does visiting the beautiful chateaux in the Loire Valley.

We could possibly even fish for piranha from a dugout canoe on an expedition-style cruise of the Amazon River’s mighty tributaries! (Not sure about the piranha part though.)

So with that introduction behind us, here’s our research on the top river cruises you can take around the world – including the scoop on some of the newest river cruise ships.

(And with blessings from the travel gods, one or more of these might just be in our future…)

Yangtze River cruising has changed since the river’s first flooding in 2003 by construction of the Three Gorges Dam.

But the Yangtze still offers scenic cruising through the spectacular Three Gorges and five-stage locks of the Three Gorges Dam.

You can ride in a sampan up a tributary as Tujia boatmen pole.

And, if you peer hard, you can make out a couple of mysterious 2,500-year-old coffins wedged in holes in the cliffs (most of the ones that once hung suspended above deep canyons are now housed in museums).

Years ago, we cruised in China with Victoria Cruises, and while comfortable, we wouldn’t call that a deluxe cruise.

(Mind you, their new Victoria Sabrina – the world’s largest river vessel – could change our minds on that. It debuts in 2021 for the Western market.)

For Yangtze River cruises, check out:

Feel like Cleopatra (or Julius Caesar) on the Nile, journeying down the same river where they honeymooned on the Egyptian queen’s royal barge.

But they no doubt would be jealous of the vessels you can cruise on today.

Put a Nile River cruise on your bucket list! The tombs and temples of ancient Egypt are eye-popping

Some of the most luxurious Nile cruises are offered by Oberoi Hotels & Resorts.

The Oberoi Zahra river ship has glass showers with full-length view windows and a misting system to keep you cool on the sundeck and outdoor restaurant.

And get this. A fleet of air-conditioned black Mercedes vans shadows the ship onshore. When the ship docks, they’re waiting and ready to whisk you away to see the tombs, temples and 5,000 years of Egyptian history.

Also check out the Viking Osiris from Viking River Cruises. Brand new and ready to sail in 2021, it was specifically built to cruise the Nile.

It should give Oberoi and Sanctuary Retreats a run for their money, promising to be “the most upscale ship in Egypt.”

Staterooms and suites are spacious (the smallest are 232 sq. ft.). Large veranda suites are 409 sq. ft. and have separate sleeping and living areas, a full step-out balcony and another French balcony.

On deck, “sail shades” inspired by the dhows that ply the local waters provide shade from the sun. And there’s a pool at the stern.

Recommended reading: The Viking Star has been hailed as the “world’s best new cruise ship”

With so many rivers, Europe offers a wide variety of itineraries. (A “Danube Waltz” cruise itinerary from Passau to Budapest has caught our interest.)

You won’t lack for choice when it comes to luxury Europe river cruises!

The following lines serve up the best Europe river cruises, as rated by both Mundy Cruising and Douglas Ward, a veteran cruise writer and author of the Berlitz guide on “River Cruising in Europe.” (We met him once on a cruise – very nice, and dapper!)

For active types, AmaWaterways, Uniworld, Scenic and Tauck carry bikes onboard each ship so you can go bicycling ashore (Scenic’s are custom-made electric bikes).

Crystal River Cruises is a newish contender which made headlines with its first river ship (Crystal Mozart) in 2016. And it’s definitely elbowing the competition out of the way in the luxury river cruising category in Europe.

Travel+Leisure puts Crystal River Cruises at the top of the “World’s Best” list of river cruises.

For floating on a river barge in France, we’d add Belmond to the list of best river trips in Europe.

Many Europe river cruises take in major Europe capitals like Paris, Zurich and St. Petersburg, which are great European destinations to visit in summer.

In India, you can meander along the jungly backwaters of Kerala on a deluxe motor vessel operated by Oberoi Hotels & Resorts.

The MV Vrinda has eight king-sized cabins; service is unobtrusive.

Excursions include rides on smaller boats to explore life along the narrow canals in the “Venice of the East.” Local dancers also come onboard for cultural performances.

These cruises are paired with various India land tours.

Uniworld also packages seven-night Ganges cruises on the beautiful Ganges Voyager II with exploring the Golden Triangle cities of Delhi, Agra and Jaipur (in total, 11 to 12 nights in India).

Belmond was one of the first companies to offer deluxe river cruises in Myanmar (Burma).

We’ve sailed the Ayeyarwady (Irrawaddy River) with them twice now – first between Bagan and Mandalay, then more recently from Yangon to Bagan. (Some day, we’d also like to cruise on the less explored Chindwin River.)

Read next: Bagan is home to thousands of ancient pagodas, but these 9 temples in Bagan are the most beautiful

Want to spot mud-splattering elephants and grunting hippos from your king-size bed?

There’s nothing quite like a river safari on the Zambezi Queen (often chartered by AmaWaterways). She potters along the Chobe River between Namibia and Botswana.

Recommended reading: Wow! We felt like we were in a National Geographic documentary on our Zambezi Queen river safari

Unlike Europe, North America apparently only has two navigable rivers for river cruising – the Mississippi and the Columbia (and the Snake and Willamette tributaries).

We haven’t cruised on a U.S. river.

But we’ve sailed several times with UnCruise Adventures in Hawaii (snorkel with manta rays!), Alaska (fabulous glacier hiking and kayaking) and, most recently, from Costa Rica to Panama.

UnCruise offers seven-night river trips on the Columbia and Snake on a replica 1898 gold rush steamer.

Then there’s the shiny new American Song by American Cruise Lines, which debuted in October, 2018. She sails the Lower Mississippi River.

A departure from the line’s other paddlewheelers that ply American rivers, this new riverboat is modern in design, with a four-storey glass atrium, a glass-walled observation lounge and spacious cabins with furnished balconies.

Also look into the American Queen Steamboat Company for an old-fashioned experience (the all-suite American Duchess is their flagship).

See temples, water buffalo working in rice paddies, floating fish markets and local villages when you cruise on the Mekong River, which flows through Vietnam, Cambodia and Laos.

The all-suite ship has a pool plus two restaurants (one an alfresco venue on the upper deck).

You’ll travel in comfort and style with these companies:

Have you taken a river cruise?

What floats your boat, and where would you love to go?

Read our cruising posts on:

Gratuities | What’s the deal with gratuities on a cruise? How much should you tip? 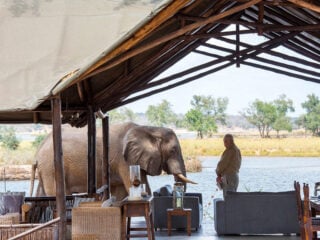 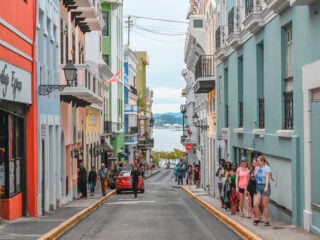 What a terrific and helpful post! My husband and I will be taking our first ever river cruise this fall – Crystal Mozart on the Danube – and enjoyed reading about your river experiences and recommendations!

Thanks for your kind words! You'll no doubt love the "Crystal Mozart" :-). Enjoy!

Excellent experience, great pictures and article you have shared with us! I would go for a long river cruise; that would be my dream.

We prefer longer cruises too :-). Many river cruise itineraries are for 14 days -- hope you get to realize your dream in the not-to-distant-future :-).

I really admire your photography and informative blog that explores beautiful river cruises around the world. This information helps visitors to take themselves out on rivers.

Thank you :-). River cruising is certainly one of the best ways to explore a concentrated region in depth :-).

Beautiful stuff guys. in fact, i also love the rivers...and was looking for a river cruise in India (only yesterday). The good thing about river cruises is that you don't need onboard entertainment. Whats the point of going on a cruise and then being indoors!

What a wonderful selection of cruises. I've not been on a river cruise before and all of these look appealing - especially the Belmond Cruise to Myanmar. I'm ashamed to say I've not visited Normandy yet, despite living just across the water on the Sussex coast. I should think about putting that right next summer :)

Oh yes, so easy for you to hop across the channel and do a French river cruise :-). No jet lag either...