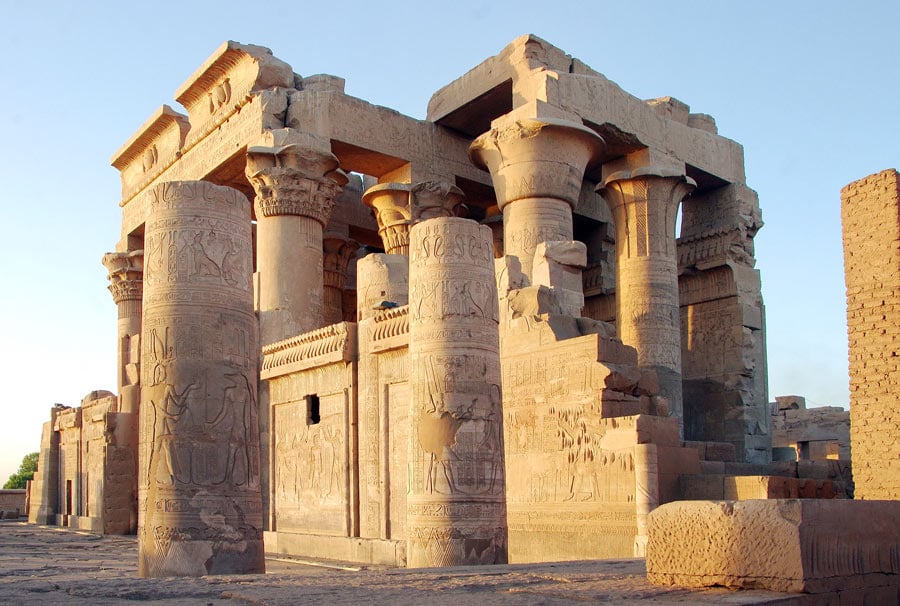 This post may contain affiliate links. As an Amazon associate, we earn from qualifying purchases. See our Disclosure policy.

Did Cleopatra once also look out from this spot in the Temple of Hathor at the “sacred lake” below? Perhaps. It’s just one of many incredulous temples of ancient Egypt we’re exploring on our Nile River cruise.

Our Egyptian guide tells us Cleopatra loved bathing in the rectangular stone pool, now empty but for palm trees growing within its walls.

Carved on an outside temple wall, there’s a large bas relief of Cleopatra, the last Pharaoh of Egypt, and her son Caesarian by Julius Caesar.

This bas relief is one of the few depictions of Cleopatra that still exist.

Famous temples of ancient Egypt – As astonishing as the Great Pyramid

The most famous of the historical places in Egypt may well be the Great Pyramid of Giza, the lone surviving member of the Seven Wonders of the Ancient World.

But cruise the Nile River between Luxor and Aswan, and you see many ancient Egypt temples rising up in the baking desert.

And the temples in Luxor and the Temple of Hathor at Denderah are just as astonishing as the Egyptian pyramids for their mystery and beauty.

Built between 125 B.C. and 60 A.D., the Denderah temple was dedicated to Hathor, the cow-headed Egyptian goddess of love, happiness, motherhood and healing.

The ceiling is intricately painted with fantastic azure-and-gold images of the sky goddess Nut (Hathor’s mother) swallowing the winged sun disc each evening and giving birth to it again each dawn.

Looking up at the soaring columns in the Hypostyle Hall in the Hathor Temple, you can see the four-sided capitals (or uppermost part of a column).

These capitals are carved with the face of Hathor, the cow-eared goddess.

Stairs lead down from the temple to an underground crypt.

We have to crawl through a narrow corridor on our hands and knees to enter the crypt, which stored amphoras of perfumed oil for religious ceremonies.

We also see the mud-brick ruins of a sanatorium within the temple grounds.

They have benches for the sick who would be waiting for cures by the priests; many of the patients would stay overnight hoping to have a healing dream of the goddess.

The Karnak Temple in the city of Luxor is truly awe-inspiring.

One of the world’s largest sacred sites (covering more than 60 acres), it’s filled with sphinxes, obelisks, shrines and gigantic statues of pharaohs. Dedicated to the sun god Amun-Ra, it was first built more than 3,500 years ago and added onto by 30 successive pharaohs.

We’re struck by the dizzying jungle of 134 colossal papyrus-shaped columns in the Hypostyle Hall.

And how did the Egyptians transport Queen Hatshepsut’s 29-metre tall obelisk – sculpted from a single piece of pink granite and weighing over 320 tons – hundreds of miles from the distant quarries at Aswan to here?

Our guide suggests it may have been floated down the Nile during an annual flood.

Then there’s Komombo Temple, the temple of healing, where our guide points out a wall relief showing surgical scissors, a scalpel, dental pliers and two women sitting on birthing chairs.

Built between 237 and 57 BC, Edfu Temple is the temple of learning, with etchings of scribes and students who studied architecture and engineering here.

It’s the largest temple dedicated to falcon-headed god Horus. Inside, you can see a of the wooden barque that contained a gilded statue of Horus (the original is in the Louvre).

Still, one of our favorites is the temple where roosting birds now sing and the promise of each new day is chronicled – Cleopatra’s temple of love.

Recommended reading: Pssst! Have you visited the ancient rose-red city of Petra? It’s a marvel!

Here’s some practical information for visiting the Egyptian temples and tombs:

Except for the pyramids near Cairo, most of Egypt’s top archaeological sites are found along the banks of the Nile River between Aswan and Luxor (Upper Egypt).

The best way to see these ancient Egyptian temples and tombs is on a Nile River cruise. We sailed on the Oberoi Zahra.

It’s hot and sunny all year in Upper Egypt, with little shade.

November to February are the mildest months and the best time to visit Egypt. Avoid June through August, when the heat is intense.

While Cairo has seen unrest, Upper Egypt has been trouble-free for years. However, check Canadian and U.S. government travel advisories before you go.

Related: Check out these other fabulous river cruises in the world!

The Oberoi Zahra was built to be the Nile’s most luxurious river boat.

All 27 suites on the Zahra feature timber floors, scattered with horsehair rugs, and marble bathrooms with picture windows.

Upon docking, an air-conditioned Mercedes van whisks you and your Egyptologist guide to touring sites.

The Zahra offers leisurely 7-day river sojourns (unlike 3- and 4-night cruises by most other boats). It’s also one of the few boats that cruises to Denderah to see the Temple of Hathor (on a private twilight visit).

More information about the Oberoi Zahra 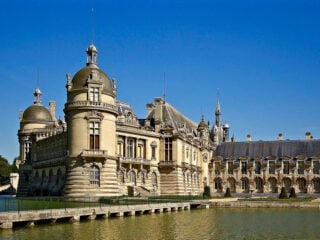 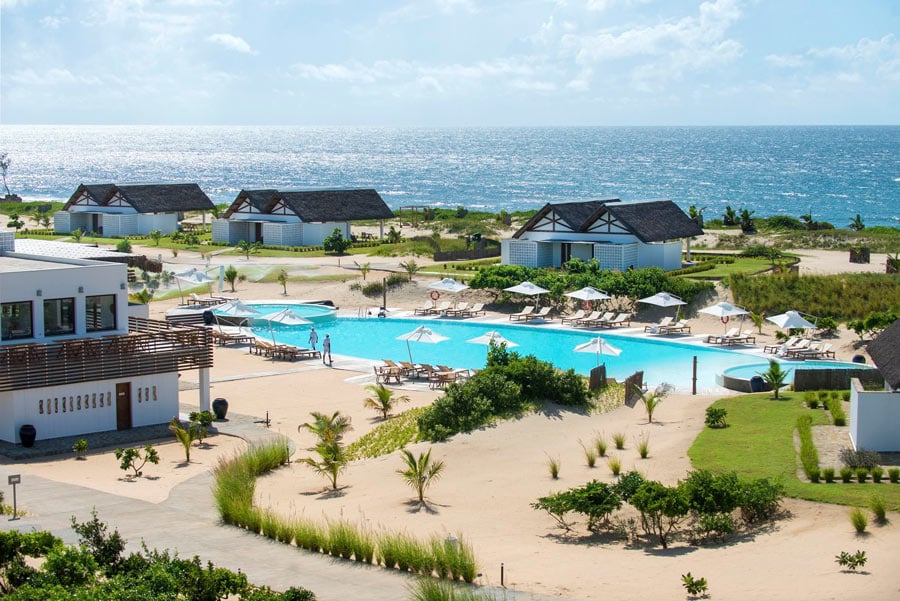 'Loving your post already. I've been to Egypt 4 times, but the last time was when our son was 2 years old, before the insecurity of the Arab Spring.

However, as I mentioned in one of your previous posts, the first time we went to Egypt, we did a two-week luxury jaunt with a 7-day river cruise sailing across the River Nile. It was a lovely small ship with basically 99 Germans and 1 British person (myself), so we literally had 3 members of staff per person!

I can't remember if we flew from Cairo or to Cairo before our cruise. Regardless, it was the scariest short flight I've ever taken in my life! The shaking and turbulence was so awful that even though I love flying and fly practically everywhere, from then on, I absolutely refused to fly tiny planes!

Anyhoo, our second week of basking in a 5-star-luxury hotel on the Red Sea, soon made me forget all about it!

Yes, being pampered at a 5 star luxury hotel can make you forget the worst travel experiences :-).

Your Egypt Nile River cruise sounds great too! It's nice when it's a one-week cruise, which makes the sightseeing more leisurely (you can rest a bit on deck and enjoy the scenery). Many Nile cruises are for 3 or 4 nights only, and so you're running from morning to night looking at all the temples, and that must get exhausting...

Wow, luxurious trip! I'm sure Spanky would rather be doing that then backpacking through Thailand. Great photos. Frank (bbqboy)

I took the kids on a Nile cruise a few years ago - from Luxor to Aswan and then back to Luxor again - and we all loved it, even when it meant getting up at the crack of dawn to see the temples and tombs before anyone else. I also loved being on deck all by myself in the early hours when everyone else was asleep, and watchimg people along the shores going about their business. We didn't see Dendera though, it sounds such an interesting experience. Would love to take a boat going north from Luxor. Sad to see photos of the empty cruise boats these days.

The photos you've taken perfectly honor the majesty of the sites you visited. Great coverage. The photo of the Oberoi Zahara is so surprising. I had no idea the landscape would look like that and be so layered.

Egypt is one of the most fascinating countries we've visited - specifically the temples and tombs galore in Luxor. It's too bad that most tours to Egypt usually only allocate 3 or 4 nights to take in the Valley of the Kings and Valley of the Queens, because you could spend a week in Luxor and only scratch the surface.

Janice, I loved the temples of Egypt. They are still so full of great frescoes and statues. Your photos are stunning! 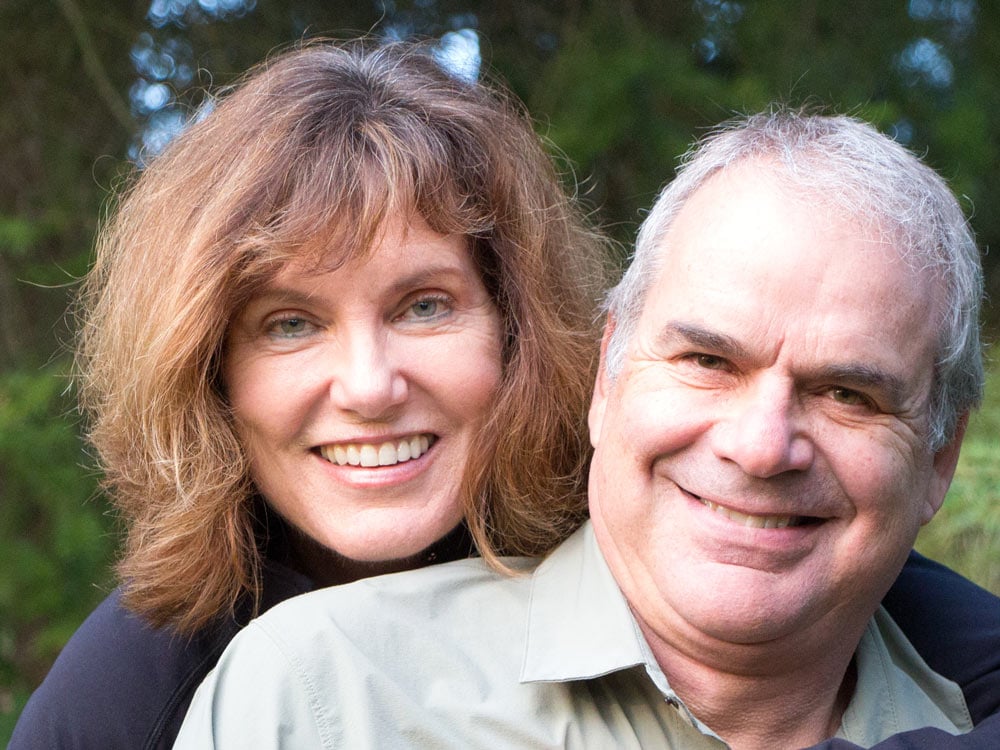