Cruising French Polynesia: As romantic as it gets

Home / Cruises / Cruising French Polynesia: As romantic as it gets

Ever since the legendary artist Paul Gauguin painted Tahitian landscapes with raven-haired beauties, French Polynesia has seduced visitors with its turquoise lagoons and islands blooming with hibiscus.

The 118-island nation invented deluxe overwater bungalows which perch on stilts over the sea.

Try to stay in one if you can. (We slept in an overwater bungalow in Bora Bora.)

But cruising French Polynesia is often the most affordable way to see this region. (It’s très romantique!)

And if you can add a pre- or post-cruise stay on one of the islands, so much the better!

Naturally, the small ships that focus on Tahiti cruises are couples-oriented.

Paul Gauguin Cruises, for example, has one ship, the 5-star Paul Gauguin.

It operates exclusively in the waters of Tahiti, French Polynesia and the South Pacific.

Windstar Cruises has its tall ship, the Wind Spirit, based in French Polynesia.

(We’ve been fortunate to have enjoyed three French Polynesia cruises now – two with Windstar Cruises and one with Paul Gauguin.)

Introducing you to the French Polynesian culture is an integral part of your cruise. (A troupe of Tahitian dancers came onboard our Paul Gauguin cruise in Raiatea to sing and dance.)

They don’t specialize in these South Pacific island cruises, however, and may only visit one or two French Polynesian islands.

Which is the best South Pacific cruise?

Scroll to the end for more information on this.

The starting point for most cruises is typically the port city of Papeete on the main island of Tahiti (where more than 60% of the country’s people live).

We checked out the lively market with fresh fish, baskets of seashells, exotic star fruit and pineapples (reminding us of the delicious Hawaiian fruit we love in Hawaii) and carved wooden warriors on display.

If you plan to buy black pearls on your cruise, you’ll want to stop at the Robert Wan Pearl Museum to learn about the country’s pearl industry.

But for that true paradise feeling, you need to visit the less-developed islands. Take Bora Bora.

Author James Michener dubbed Bora Bora “the most beautiful island in the world.”

On a jeep excursion – bone-jarring but thrilling – we saw every tropical fruit imaginable (from bananas to mangos) growing wild, as well as massive 20-foot cannons left behind by the Americans after WW II.

On a ray feeding tour, we caressed soft stingrays swirling about us as we knelt in the lagoon.

Snorkeling with sharks is another popular Bora Bora shore excursion.

And don’t worry about the sharks – they’re safe.

It’s the kicking feet and bobbing elbows of your fellow snorkelers you have to worry about!

Coral reefs around the islands teem with galaxies of rainbow-hued fish and exotic sea life, so snorkeling and diving are superb throughout.

But Rangiroa is special.

When conditions are right, divers and snorkelers can shoot through a pass between the ocean and lagoon in a surge of rushing water – and watch sharks (harmless to humans) devour hapless fish washed in with the tide.

For more heart-pounding fun, Moorea has a great hike up to Belvedere Lookout Point.

Raiatea is where we kayaked the peaceful Faaroa River.

We paddled through a sea of yellow hibiscus, fallen from the lacy canopy of foliage above, past mangroves, bamboo groves and giant ferns.

Get thee to a motu

And the beaches in French Polynesia? Well, they’re some of the prettiest beaches in the world.

You need only shake your towel out on any number of unspoiled white-sand motus (small islands, most uninhabited) to experience life as dreamy as it gets.

We may be a little biased here.

But we’d say the best South Pacific cruises in French Polynesia are those that are dedicated Tahiti cruises, i.e., Tahiti cruise ships based out of Papeete which cruise the Tahitian islands on a regular basis – such as the Paul Gauguin and the Wind Spirit.

(There are also a couple of dual-purpose passenger and freighter ships, like the Aranui 5, that are dedicated to sailing in the area.)

Which French Polynesia cruise is better? Tough question. We loved both.

But we’ll try to help distinguish between the two cruise lines so you can decide which would suit you best.

The Wind Spirit is smaller.

It’s a 4-masted tall ship that looks like a sailing ship (the sails are computerized). Carrying only 148 guests, it feels more intimate.

Cabins are cozy at 188 square feet in size, but plush in a nautical way (with ocean views through portholes, queen-size beds and flat-screen TVs with DVD players).

They don’t have balconies, however.

You may also find honeymooners and slightly younger guests (aged 30 to 50) on the Wind Spirit.

The elegant Paul Gauguin is a bigger ship, carrying 332 passengers. (It’s operated by Paul Gauguin Cruises, which in turn is run by the French line, Ponant.)

About 70% of its cabins have private balconies.

And the cabins are bigger with full-size bathtubs (with shower) and fridges stocked with soft drinks; the “average” cabins range in size from approximately 250 to 350 square feet.

Rates are more expensive but all-inclusive.

Your roundtrip airfare from L.A. or San Francisco, wine and beer, cruise gratuities and more are all included (you pay for these items on Windstar).

What’s it like to cruise with Ponant? Ooh la la! See our review of Ponant Cruises (we love the French twist)

If you’re younger or more active and would like a more unique sailing-style experience, then the Wind Spirit might be for you.

If you’d like a balcony with a more comfortable cabin and more evening entertainment, you might prefer the Paul Gauguin.

Either way, the French Polynesian islands are gorgeous, and you won’t regret cruising in this beautiful part of the world.

Read next: Say hello to Hawaii cruises for families!

See these French Polynesia and Tahiti travel guides available on Amazon. (As an Amazon associate, we earn from qualifying purchases.)

Photo credits: © Janice and George Mucalov, SandInMySuitcase (except where noted) 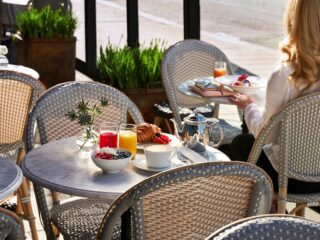 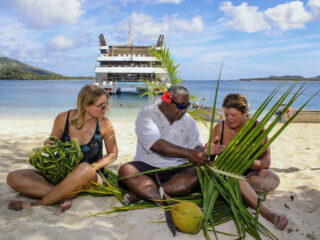 does anyone suggest Windstar over Paul Gauguin cruise or vice versa??

We've cruised with both Windstar and Paul Gauguin in French Polynesia :-). You may find slightly younger guests (30s to 50s) on Windstar - it just has a younger feel (very romantic, perfect for a honeymoon). Cabins are smaller. You also (kind of) get that feeling of sailing. But both are excellent and highly regarded cruise lines - you're sure to have a great time no matter which you pick :-).

Great info here! I'm going to file it away for my future trip planning.

Cruising French Polynesia is so added to my list, WoW what an amazing place. Your photos make me want to jump on an airplane right now.

We have yet to take a cruise, but this makes me reconsider my reasons for not going on one - what a beautiful journey!