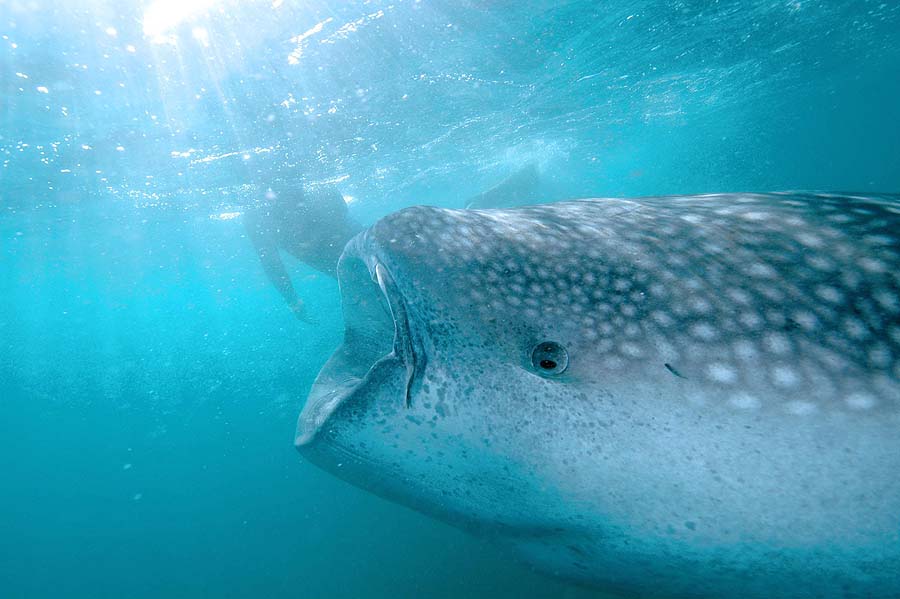 Nothing could quite prepare us for the moment when we first saw a massive whale shark gliding slowly by, just feet away.

It was one of those OMG moments, an almost other-worldly experience.

How wondrous that we could swim with whale sharks in La Paz – that these creatures allowed us to snorkel alongside them in the wild!

What’s it like to swim with whale sharks in La Paz?

Tips for snorkeling with whale sharks

Whale sharks are actually not whales (or sharks). They’re fish – the largest fish in the world. They’re known to grow up to 40 feet long and weigh up to 47,000 pounds!

But even though whale sharks are humongous, they are really just “gentle giants.”

Grey with white spots, they eat only tiny plankton and krill. And they’re not at all dangerous to divers, snorkelers and swimmers.

The only concern we had when swimming with the whale sharks was to stay away from their cavernous mouths. To feed, they open their mouths very wide to suck in gallons of sea water from which to filter out algae, plankton and krill.

And our concern wasn’t for us – a whale shark won’t swallow you. Even though their mouths can stretch to four feet wide, their sieve-like “gill rakers” are designed just to feed on tiny things.

No, our concern was for the whale sharks. We didn’t want to accidentally poke them in their open mouths with a flippered foot.

What’s it like to swim with whale sharks in La Paz?

Whale sharks are unfortunately endangered. However, there are still places around the world where you can swim with whale sharks – the Bay of La Paz in the Sea of Cortez is one such place.

We took a day tour with Cabo Expeditions, which included picking us up from our resort in Cabo San Lucas and driving us by van to La Paz (about a two-hour drive).

Check out all the great things to do in Los Cabos for water lovers! Read next

In La Paz, we geared up in wet suits, then climbed aboard our boat for the ride out into the bay.

We were accompanied by our Cabo Expeditions guide and a federally licensed local guide with good knowledge of marine biology (along with a boat captain, of course).

Arial spotter planes looked for the whale sharks from above, communicating their location to our boat captain.

Other pangas and boats also descended on the spot where four or five whale sharks were feeding.

Swimming with whale sharks (not easy!)

When a whale shark was spotted swimming close by our boat, our guide shouted at us to jump in the water and swim up to it.

Then we’d swim alongside the whale shark while peering down at it through our snorkel mask. When it swam away from us and we couldn’t follow it any more, we’d swim back to the boat, climb aboard and wait for the next whale shark to watch.

And imprint this awesome once-in-a-lifetime experience in memory.

But while tremendously exciting to be watching whale sharks up close, it was hard to ignore the cold seeping into our bones and stiffening our fingers. (We went in early January.)

In winter, which is the La Paz whale shark season, the water temperature drops to the low 60s.

So we felt both regret and relief when it was time to say goodbye to the whale sharks and return to La Paz.

When you plan your Los Cabos trip, you might actually want to stay in La Paz for a couple of days – there are more fun things to do in La Paz (like snorkeling with sea lions).

For us, though, we were taken to a local Mexican restaurant for hot soup and tortillas, then driven back to Cabo.

The best time to see whale sharks in La Paz is from October to February. (The water will be almost bathtub warm in October and November, but chilly in January and February.)

There are ecologically responsible operators which offer La Paz whale shark tours – and then there are some that aren’t. Choose one that is. For example, boats should maintain a safe distance from the whale sharks to avoid any possibility of hurting them.

The better tours may be more expensive; expect to pay around $200 USD p.p. for a tour departing from Cabo San Lucas. But you’ll learn more about whale sharks and know that you’re doing your part to not endanger them any further.

Here are some of the best La Paz whale shark tour companies:

We found Cabo Expeditions to be very conscientious. Their 8-hour tours leave from Cabo. Website

We’ve also heard from friends that Fun Baja (based in La Paz) is good too. Website

Cabo Adventures is another reputable company offering whale shark encounter experiences. We’ve booked other activities in Los Cabos with them and can recommend them. Website

One of the best Cabo excursions!

Without a doubt, we can say that taking a La Paz whale sharks tour is one of the best Cabo day trips!

Where to go scuba diving in Cabo San Lucas? Find out here

Don’t touch a whale shark (even though it’s quite easy to do). Touching them can transfer harmful bacteria from you to them, and make their skin vulnerable to infection.

If snorkeling with whale sharks in La Paz, know that you might find the water cold even with a wetsuit (depending on the month you go). Try to rent a thicker wetsuit or wear an additional wetsuit vest for extra warmth.

If you wear sunscreen, use a reef-friendly, biodegradable product so the chemicals don’t harm the marine life.

You’re in the water with very large animals. If you don’t think you’ll be comfortable with this, swimming with whale sharks may not be the tour for you.

Where else to swim with whale sharks in Mexico?

La Paz isn’t the only spot in Mexico where you can go swimming with whale sharks.

The other place to swim with whale sharks in Mexico is around Isla Holbox. It’s a small unspoiled island north of Cancun.

From the island, you can take an Isla Holbox tour to swim and snorkel with the whale sharks that gather to feed in the plankton-rich waters there. (Getting up close-and-personal with whale sharks is one of the best things to do in the Riviera Maya.)

The water is comfortably warm during the whale shark season there (which is in summer).

We write a lot about Mexico!

Check out our posts on:

Things to Do in Riviera Maya

We paid Cabo Expeditions a discounted media rate to experience this whale shark swim. But as professional travel writers, we always report on our experiences as we see them (and point out issues you should know about).

Have you gone swimming with whale sharks? Where?