Snorkeling at Santa Maria Beach, Cabo: All you need to know

Please follow local guidelines to keep yourself and others safe. Also double-check what’s open before your trip, as things are constantly changing.

But let’s start this fishy-sounding tale from the beginning…

’Coz the whales are just the bonus. You’ll also see tons of tropical fish too.

And that’s why you go to Santa Maria Beach. For fabulous snorkeling!

We’ve recently returned from another awesome visit to Cabo San Lucas – and another morning trip to snorkel at Santa Maria.

And as of 2020, there are some new changes to Santa Maria Beach.

We’re going to share how to get there, what to expect when snorkeling on your own, facilities at the beach, whether you should take a snorkel boat tour (or not) and exactly where the best place is to snorkel at Santa Maria Bay.

There’s not a ripple stirring the sea.

The water is so clear, we can spot tiny iridescent blue fish (damselfish?) at least 50 feet away, darting about the reef.

We love scuba diving in Cabo in October when the water is bathtub-warm.

But even this January day (winter in Los Cabos, when daytime temps can sometimes be in the low 70s F.), the sea is warm enough for snorkeling.

So that’s what we’re doing – snorkeling in Santa Maria Bay in Cabo, Mexico. Bumping fins with schools of colorful reef fish, feeding bread to large clouds of yellow porkfish that swirl around us, and loving every moment!

Tip: As you face the water from the beach, the best snorkeling is at the far end by the rocks to your right (in front of the beach club for local residents).

Santa Maria Beach, Cabo San Lucas, is one of the three top places to snorkel in Los Cabos.

The beach (“Playa Santa Maria” in local lingo) is also one of the best beaches in Los Cabos. The coarse golden sand beach is pristine!

Having arrived early (around 9:00 a.m.), we almost have the bay to ourselves. And good news, there are palapas that we can plop down under for some welcome shade when the sun begins to burn brighter.

Read next! Check out these 8 fun water activities in Cabo San Lucas for beach lovers

Look, there are whales!

Later, drying off in the sun after more than an hour in the water, we spot the whales. They’re about 100 feet away from us on the beach.

At first, we see only plumes of spray.

And then – we see the slick round humps of humpbacks as they swim on the water’s surface.

But these whales are totally unexpected.

And they just keep spouting and finning and showing us a whale of a time. A nice way to finish off a glorious morning of snorkeling…

Snorkeling at Santa Maria Beach your own way

We didn’t take a tour to go snorkeling at Santa Maria Beach.

(If we had, we’d be sharing our views of Captain Nemo with up to 100 other eager snorkelers jumping off their catamaran or sailboat.)

No, if you want pristine conditions, the best way to go snorkeling here is to do it on your own.

Each year we visit Cabo, we make a point of returning to Santa Maria Beach to snorkel. We enjoy it so much, we often end up going several times each trip.

Get to the beach early though.

The first of the snorkel tour boats arrive around 10:00 am.

Often by 11:00 am, there are some five snorkeling tour boats anchored in the bay. The snorkelers from the boats don’t usually swim to the beach though.

Tip: If you want to snag one of the four new thatch palapas at Playa Santa Maria, Cabo, you must arrive by 9:00 am. Otherwise, be sure to bring your own beach umbrella for shade.

The public beach facilities have been spiffed up recently.

When you arrive at the parking lot to the beach, you’ll notice a big clean new bathroom building, with flush toilets and change rooms.

Outside the bathroom, there are outdoor showers, so you can rinse off the salt water after swimming and also rinse off your snorkeling gear.

There’s now also a new paved walkway from the parking lot and bathrooms to the beach.

If you haven’t been to the beach in a few years, you will no doubt be surprised to see a large new hotel there.

There’s no stopping development in Cabo (which just keeps getting bigger and better!), and a new Montage Los Cabos hotel has been built on the shores above the beach. It opened in November, 2018.

The low-rise hotel is quite tasteful though, and blends in with the landscape. It has beach chairs and umbrellas for guests set up in a middle section of the beach.

You can have lunch at the Montage Los Cabos if you reserve in advance. Marea, the hotel’s stylish open-air beachfront restaurant, serves fresh seafood, Mexican food and burgers.

But you can’t just walk up from the beach and access the hotel restaurant as a non-guest. (We asked.)

You need to drive around to the front of the hotel and enter through the lobby to have lunch at the hotel restaurant. (Obviously you’ll want to wear suitable clothing, not just a wet bathing suit!)

Read our reviews of where to stay! These are the best boutique and 5-star hotels in Cabo San Lucas

At the far end of the beach from the public parking lot, you’ll see a chi-chi beach club, usually empty!

It’s for the exclusive use of local home-owners. So it’s off limits if you don’t have privileges.

Tip: Bring your own snorkel gear, water and food or snacks, as there’s no gear rental stand or readily-accessible public restaurant/bar.

Drive along the Corridor highway connecting Cabo San Lucas with San Jose del Cabo to Km 12 (8 miles east of Cabo) and look out for the “Playa Santa Maria” sign, indicating the turn-off toward the ocean. Follow the road for about 1/4 mile to the paved parking lot.

It’s easy to to hop on the bus if you don’t have a car.

While we usually go in a rental car, we have taken the bus. It’s not a “first-class Mexico bus” like we took for longer distances when visiting Mexico’s colonial towns.

But the local Cabo bus is very inexpensive, and not a hardship, if you’re feeling a little adventurous.

Buses will stop along the Corridor highway if you flag them down. Tell the driver you want to get off at Santa Maria Bay for snorkeling. There’s a bus stop on the side of the highway there.

What if you want to take a snorkeling tour by boat?

We get that. You may not have a rented car, and you may not want to take a taxi or the bus.

We recommend this kayaking-and-snorkeling tour of both Santa Maria and Chileno Bays – we’ve done this tour and really enjoyed it!

(The kayaking makes the tour that much more fun.)

Recommended reading: See these 25 epic things to do in Cabo San Lucas, Mexico!

See this link to the Google maps location of Santa Maria Bay (in front of the Montage Los Cabos).

Read our essential posts on:

Getting around | Get the scoop on the the best Cabo airport transfers from the Cabo San Lucas airport. 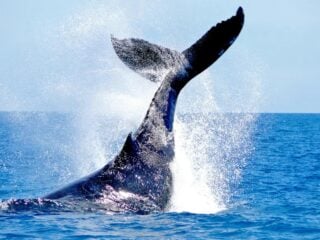 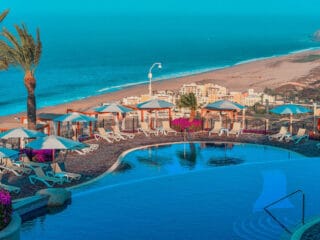 Yes, there's no stopping development, and the new Montage Los Cabos has opened up on Santa Maria Bay (which is the same as Santa Maria Beach).

Depending on your point of view, it's a bad news/good news scenario. The bad news - expect more people on the beach. The good news - the finished hotel looks better than the unfinished construction site which marred the landscape for years. And there's now a classy new restaurant you can visit for lunch :-).

In your article you state Santa Maria Bay is one of the three best places to snorkel in Cabo San Lucas. What are the other two? Thanks.

Oh, sorry, we should have mentioned the other two! They are Pelican Rock at Land's End (take a water taxi to get there, or you can kayak over) and Chileno Bay (if you go on a snorkeling tour, both Santa Maria and Chileno are often included - but of course, you'll have lots of other snorkelers with you).

We are in the beginning stages of planning a trip to Cabo for spring 2018. I am trying to figure out whether to stay in Cabo St. Lucas or San Jose Cabo. We like it quiet but still easy to get around without a car. Can Maria beach be accessible by a bus from San Jose Cabo?

Yes, there are buses that travel the Corridor between San Jose del Cabo and Cabo San Lucas, stopping along the way (just let the driver know where you want to get off). We've taken the bus back and forth several times. Have fun planning your trip!

have you been snorkeling in Cabo in March? we are going in March 2017. Tried the snorkeling tour during our first trip and was very disappointed. Since the guides bait the fish, all we saw was gray striped fish (not sure of their name).

We haven't gone snorkeling in Cabo in March - mostly October/November and December/January. Maybe try going snorkeling on your own, make it a bit of an adventure - and perhaps you won't be quite so disappointed as you might be if on a "snorkeling tour." You can find some good snorkeling around Pelican Rock by the Arch too. Take a glass bottom boat for a tour of the Arch and to see the sea lions, then get dropped off on the teeny strip of sand still in front of Pelican Rock, do some snorkeling and then hail a boat to go back. That's a fun morning (and not as expensive as a tour). Enjoy your Cabo holiday!

Cabo is so close to where you are, no doubt you'll get to explore it soonish :-).