Home / Luxury Hotels / 9+ of our favorite romantic hotels in Europe

By Janice and George | Updated October 14, 2020
Please only travel when it's safe

As professional travel writers, we’ve set our suitcases down in some pretty fabulous hotels around the world (including beautiful villa resorts with private pools around the globe).

We’ve also stayed at many romantic hotels in Europe. And we’re often asked for recommendations about which hotels to book. Romantic hotels in Venice, Italy? (Affordable ones?) Beautiful hotels in Germany? Gorgeous luxury hotels in Rome to celebrate an anniversary?

Most romantic hotels in Europe

For the cultural continent across the pond from North America, here are 9+ of our favorite romantic luxury Europe hotels.

Lit by a painter’s soft morning light – with monumental buildings and colorful faded palaces lining its canals – romantic Venice can’t fail to enchant. Fortunately, it offers lovely couple’s digs that don’t break the budget. The Palazzo Abadessa is such a gem.

Formerly a 16th century palace, it’s been turned into a charming Venice hotel, handily located in the quiet northern Cannaregio district, a 15- to 20-minute stroll from St. Mark’s Square. (Some people think it’s too far from the center of things, but we like walking – and crossing Venice’s beautiful bridges and canals. That’s partly what Venice is about, right?)

The Palazzo contains 15 rooms and suites, each unique, adorned by Murano chandeliers, antique furniture and silk wall coverings. All are a joy – though avoid the teensy smallest room (it’s really too cramped for comfort).

Our favorite is Room 26 (once the palace kitchen), with its exposed timber beam ceiling, stone fireplace and an original giant stone sink in the bathroom.

The hotel’s atrium has marble floors and stained lead-glass windows that overlook a canal. A marble staircase takes you up to the first floor and more rooms.

You can sip complimentary Prosecco and nibble on snacks, set out on silver trays in the hall, before heading off to dinner.

Breakfast (included) in the tranquility of the walled garden is a special treat. Fortified by fresh-baked croissants, sliced fruit, ham, cheeses and as many cappuccinos as we could drink, we happily set off each morning to explore Venice’s splendors.

It doesn’t cost an arm and a leg! The Hotel Palazzo Abadessa is one of the best-value boutique hotels in Venice with charm and character (and we’ve checked out several boutique Venice hotels).

During Baden-Baden’s golden age as “the summer capital of Europe,” the continent’s rich and famous gathered there each summer to socialize and gamble in its glamorous casino.

In 1874, a duke built the neo-renaissance villa that’s now the exquisite Hotel Belle Epoque. It’s located in the center of beautiful Baden-Baden – now a fashionable spa town – just a short walk from the opulent Friedrichsbad baths (where men and women bathe nude together and where we had to throw away our modesty).

A member of Small Luxury Hotels of the World, Hotel Belle Epoque has two buildings, and its 22 rooms and suites are individually decorated.

We prefer the more atmospheric older building, where rooms are themed Louis XV, Victorian and so on. If possible, look inside before you choose.

The bathroom had some quirks – we had to shower sitting down in the Jacuzzi tub. But we had modern essentials like air-conditioning and complimentary in-room Internet. The Belle Epoque is easily one of the most romantic hotels in Europe, and its charm far outweighs the minor quirks.

As well as a full buffet breakfast, rates at Hotel Belle Epoque include complimentary afternoon tea, which we enjoyed one afternoon on the hotel’s outdoor stone terrace. Young gents in pinstriped pants and tails served us cappuccinos and tea, as we bit into fresh cakes from Royal Doulton china. Just as we imagine the duke did, years ago…

Imposing senators. Heroic gladiators. Victorious armies. Rome captures the imagination with its past imperial grandeur, doesn’t it? If you want to luxuriate in a Rome hotel that matches its grand past – one that oozes elegance and romance – the St. Regis Rome is for you.

Cesar Ritz opened the deluxe hotel (called the Grand Hotel) in 1894 to great acclaim throughout Europe. The lobby featured cascading chandeliers and astonishing glass or trompe l’oeil (trick of the eye) ceilings. A world first, it offered “private bathrooms and two electric lights in every room” as well as Rome’s first ballroom. Over the years, it hosted heads of state and celebrities galore.

There’s also the hotel’s butler service (of course!), as well as an Asian-themed spa, and a see-and-be-seen bar in the showstopping lobby, which serves up divine Bellinis.

The St. Regis Rome is within easy walking distance to many of Rome’s best-loved attractions – the Spanish Steps, the Trevi Fountain, the Roman Forum and the Colosseum. And shopping too – the Via Veneto and Via Condotti are also nearby. Now where’s that credit card?

When in London, you want to stay smack-dab in its exciting heart. But because you also want some place romantic, you want a quiet retreat to enjoy some respite from the hubbub outside. Enter the elegant One Aldwych.

Superbly located in Covent Garden, this classy boutique hotel is within walking distance of the British Museum, theaters, shops, art galleries and the nightlife of happening Soho.

Housed within a 1907 wedge-shaped granite building, it pares back on superfluous luxury and concentrates on modern-day comfort.

We like that One Aldwych has made serious efforts to be “green.”

Its natural REN bath products are chemical-free, and vacuum-oriented loos use 80% less water than normal. A stunning blue-tiled swimming pool, which pipes in classical music underwater, is also chlorine-free.

In the evenings, the hotel’s capacious Lobby Bar is abuzz with hipsters, bankers, party-goers and couples having drinks after going to the theater. The Indigo restaurant overlooks the lively scene, while the Axis restaurant is more formal.

One Aldwych consistently ranks among London’s best hotels – and we can see why.

Service is exceptional and highly professional at One Aldwych – no snootiness in sight.

An early stomping ground of the Beatles, wealthy Hamburg is renowned for its shipbuilding prowess and sailor-friendly “Reeperbahn” red-light district. It also entices with some fine hotel establishments like the gracious, mansion-like Louis C. Jacob (affectionately known as “the Jacob”).

Located in a secluded residential district on the Elbe river, this romantic luxury hotel in Hamburg offers 64 deluxe rooms and 21 suites. All are unique, with oak floors, modern stone bathrooms, and special little touches – ours came with fresh flowers and a crystal decanter with help-yourself cream sherry.

Rooms are housed in two buildings: an artfully restored main building, dating to 1791, and a modern addition across the street, reached by an underground passage.

The hotel’s public areas are filled with original art – more than 500 paintings and other artworks (the largest private collection open to the public in northern Germany).

The main building of hotel overlooks a charming terrace. Studded with ancient lime trees, it invites you, on warm days, to linger over coffee or tea and watch the ships go by on the wide Elbe river.

For foodies, the Jacob offers haute cuisine in its Michelin-starred restaurant. And well over 100 “Jacobines” give you a genuine taste of Hanseatic hospitality.

The hotel’s cozy little wine bar across the street from the Louis C. Jacob, with wood tables and wood-beam ceilings, exudes warmth. It’s a popular spot for both locals and guests to rendezvous for delicious flammkuchen (a fresh take on thin crust wood-oven pizza) and platters of truffle salami with thick bread and pesto. 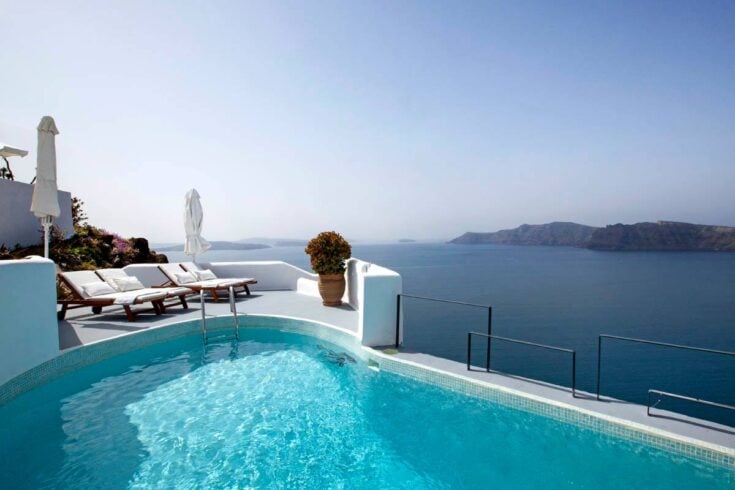 Some of the most romantic hotels in Santorini are in the white-washed village of Oia. Ikies Traditional Houses is one of them. Only 11 rooms and suites. Private breakfasts. In-room massages. Okay, you get the idea...

The views! With spectacular views of Santorini’s caldera and the sparkling Aegean Sea, we were content just soaking up the sun and sipping Santorini wine on our spacious terrace. 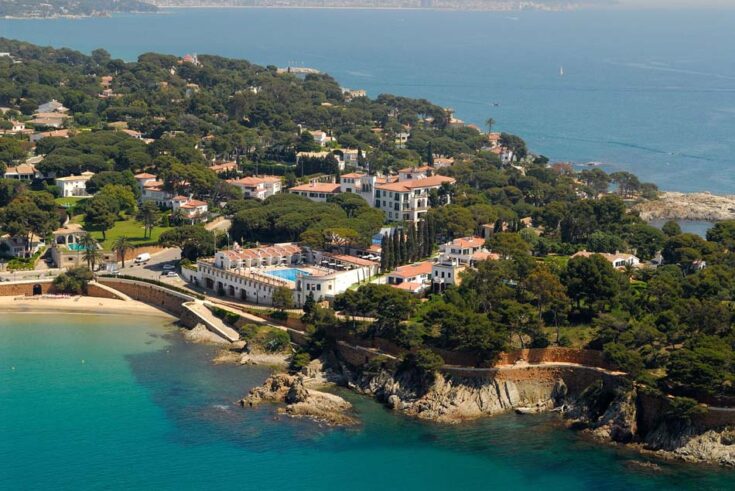 Loved by celebs and world leaders, this antique-filled hotel in the Costa Brava is also a favorite vacation spot for couples seeking a luxury romantic getaway.

What we especially like about Hostal de la Gavina:

The epic coastal trail, Camino de Ronda, passes right by the hotel. It’s a beautiful 30-minute walk past villas and olive trees to the hidden gem of Sa Conca beach. Back at the hotel, cool off with a dip in the enormous swimming pool, which looks out over the sea. 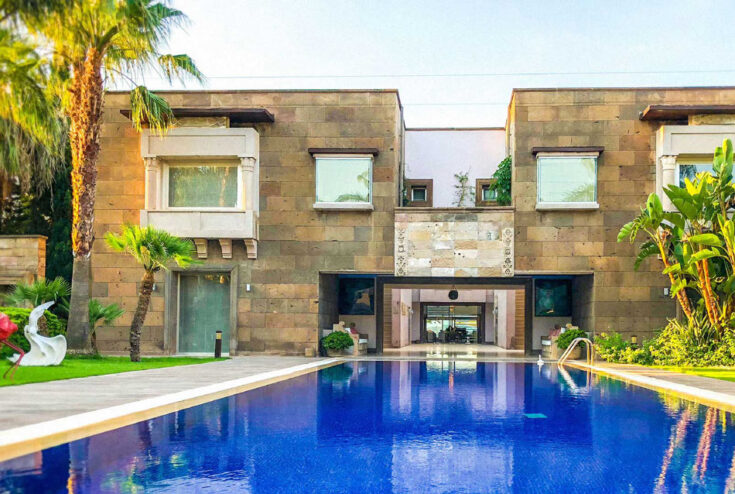 We slept in a huge boat-shaped bed, and our bathroom ceiling was lit by twinkling lights at night. There’s nothing ordinary about this seaside adults-only hotel with 12 suites!

The hotel is also an art gallery, filled with precious paintings by Turkish artists. It has an artist-in-residence program too. 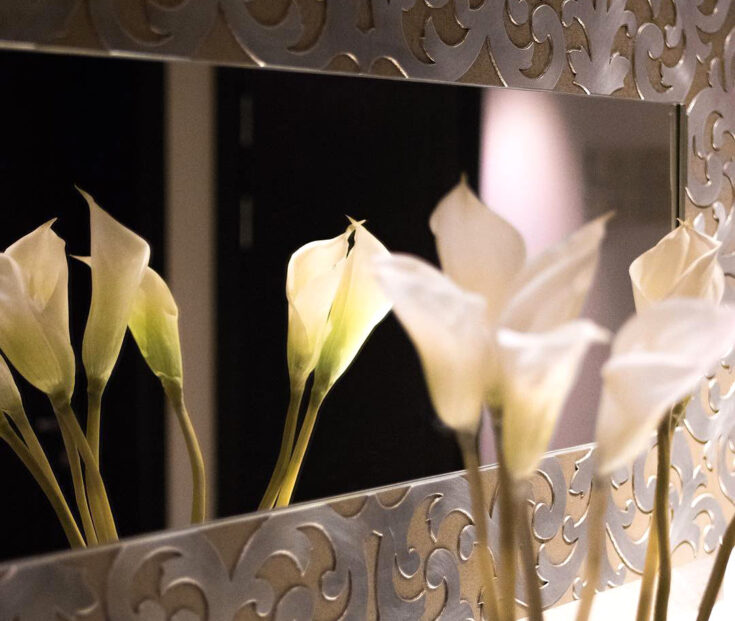 Hotel Havnekontoret offers a romantic setting, right on Bergen’s historic waterfront. Our room had a beautiful bay window with lead-paned windows, inset with a cushioned settee where we could curl up with a drink and look out over the water.

The whimsical jewel colors! Splashes of purple are found throughout – in the silk drapes, velvet chairs in the lobby and elsewhere.

Do any of these hotels make you want to grab your honey and say, “We’ve got to stay there!”? Have you stayed at any really romantic hotels in Europe? Let us know in the Comments below!

Rhodes (Greece) | Check out the 8 best and most beautiful boutique hotels in Rhodes, ranging from Old Town hotels to beach escapes in Lindos village.

Mallorca (Spain) | From a farm finca to a fabulous seaside estate, you’ll love these enchanting places to stay in Mallorca.

Mykonos (Greece) | You’re in Mykonos! Of course you want to stay in one of the chic beach hotels in Mykonos.

We stayed as media guests of these beautiful hotels in Europe for various travel magazine articles and our blog. But we’re always free to write what we want without influence (and we point out flaws and annoyances when we encounter them).