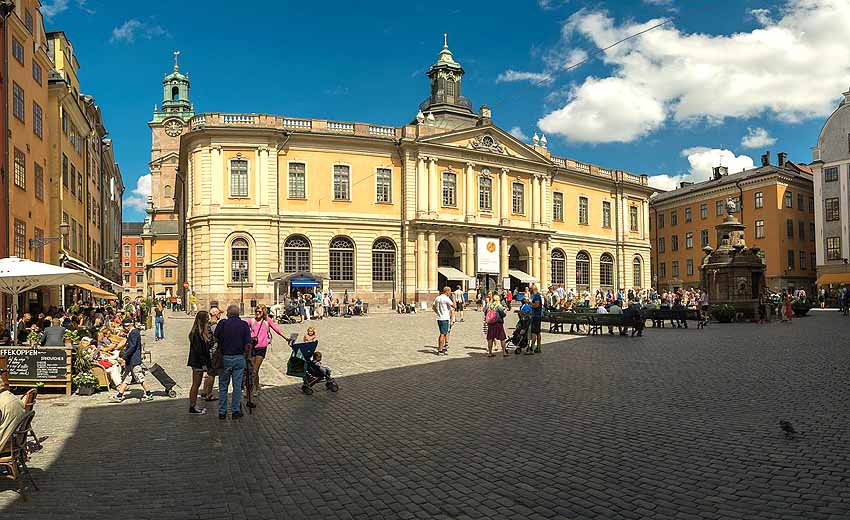 Needless to say, there are many interesting things to do in Gamla Stan. And the best way to take in these delightful sights is to walk this historic area.

Contents: 8 Fun things to do in Gamla Gamla Stan

8 Things to do in Gamla Stan

We’d flown into Stockholm for a Baltic cruise a few days earlier so we could enjoy some “pre-cruise” time exploring the city.

And so, armed with our trusty Rick Steves’ Northern European Cruise Ports guide, we set off on foot to explore Gamla Stan.

While we tried to follow Rick Steves’ Stockholm walking tour of Gamla Stan, we got lost anyway (just as we have in other higgledy piggledy medieval towns like tiny Trogir and the 1,700-year-old palace city of Split).

But that’s part of the fun of exploring these old European towns, isn’t it!

In the end, it didn’t matter. Gamla Stan is compact – and visually rich – enough, that it didn’t bother us if we had to retrace our footsteps a couple of times.

Here, then, are 8 fun things to see and do in Gamla Stan:

Stortorget (or “the Big Square”) is the oldest square in Stockholm. It’s lined by beautiful buildings and houses dating back to the 17th and 18th centuries, once owned by wealthy merchants.

The cafés around this Gamla Stan square make good people watching spots. As do the many benches which invite you to plop yourself down and soak up the atmosphere…

2) Squeeze through the Alley of Marten Trotzig

How skinny can a street be? Pretty skinny!

The “Alley of Marten Trotzig” (Marten Trotzigs grand) is the narrowest street in Stockholm – a mere 35 inches wide. It consists of 36 steps, which get narrower and narrower as they lead to the top of the alley.

The alley is named after Marten Trotzig (1559 to 1617), who became one of Stockholm’s richest merchants. (Unfortunately, being rich was not enough to protect him from being beaten to death.)

Built in Baroque style, the 18th century Swedish Royal Palace is the official residence of the Swedish monarchy. Many rooms are open to the public, however, including five museums.

The Armory contains royal costumes and armor. The reception rooms with their splendid interiors are worth a look too.

Don’t miss the daily changing of the guard, which is quite a show-stopper.

Pssst! Visiting Drottningholm Palace is a fabulous day trip from Stockholm – read next!

Near the Royal Palace, Storkyrkan (literally “the Great Church”) has been around for as long as Stockholm.

Apparently there are more moose per square mile in Sweden than in any other country.

That probably accounts for why moose memorabilia are popular as souvenirs – like this blanket decorated with moose pictures.

If you’re moose-mad, you’ll have fun doing a little Gamla Stan shopping – checking out all the moose-themed souvenirs.

6) Gawk at all the bicycles

Gamla Stan itself is more geared to walking, but Stockholm in general is quite bicycle-friendly. It’s fun to see all the bicycles people wheel around.

Fika (pronounced “fee-ka”) is essentially Swedish for taking a break for coffee and a pastry, perhaps a cinnamon roll or vanilla bun.

Of course, we indulged in the Swedish custom too and stopped for fika while walking Gamla Stan.

8) Eat at one of the Gamla Stan restaurants

Indeed, eating and drinking is popular in Gamla Stan!

And there are many tempting restaurants in Gamla Stan if you want more than just fika.

You can zoom in and out on this map of Gamla Stan to plan how you want to explore the area.

Curious about our Baltic cruise on the beautiful Viking Star? See here

You might want to buy a Stockholm Pass, the sightseeing city card that gives you free entry to over 60 museums, attractions and tours.

If you do, you can get a free walking tour of Gamla Stan. This guided Stockholm walking tour gives you a short 1.5 hour introduction to the Old Town. (Note:  The Stockholm Pass isn’t valid for a free tour between June 30 and August 26.)

Other fun things to do in Stockholm

Other Stockholm attractions we enjoyed that are available through the Stockholm Pass include:

Where to stay in Stockholm

Overlooking one of Stockholm’s harbors, our base was the Hotel Diplomat Stockholm, originally built in 1911 as an Art Nouveau palace – lovely!

Best hotel in Stockholm? We loved the stylish Hotel Diplomat Stockholm – read next!

Transportation from the airport:

We pre-booked a chauffeur-driven car with Blacklane to take us from the airport to our hotel. Blacklane is a professional driver service that contracts with a network of licensed drivers in over 50 countries. Surprisingly, the rate was only slightly more than what a taxi would have cost, but we had the added comfort of being met at the airport in a strange city.

For more on what to see and do in Stockholm, see Visit Stockholm, the official tourist information website.

We were fortunate we were visiting in September, at the end of Stockholm’s tourist season – we didn’t encounter the crowds we understand can gather in summer. Can’t blame them though… With its lakes and fingers of waterways, Stockholm is crazily beautiful.

Bottom line?  If you can, don’t visit in July or August. While the weather is dry and warm in high summer, prices are the highest and it’s very busy too. To avoid hordes of tourists, the best time to visit Stockholm is June and September.

Ready to book your trip to Stockholm?

Check out the following helpful services:

Pssst! If you make a booking or purchase through our site, we’ll earn a small commission (at no cost to you). Thanks!

Check out these posts of ours!

Top Things to Do in Colorful Old San Juan