By Janice and George | Updated October 24, 2019
Please don’t travel until it’s safe! Read for inspiration and future plans only 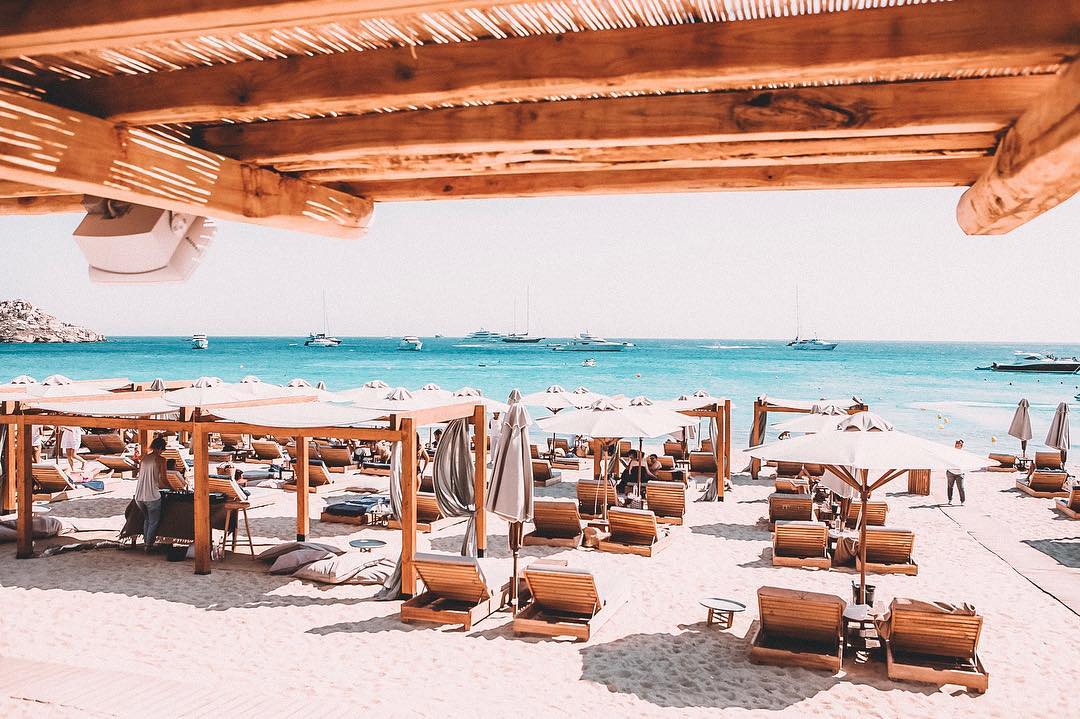 On the beach? Check. Close to the colorful tavernas and best restaurants in Mykonos town? Check. With character, charm and glamor too? Check.

We stayed at two awesome Mykonos beach hotels that fit the bill. And we’ve scouted out three more of the best hotels in Mykonos that also boast to-die-for beachfront locations.

Today, Mykonos is the sexy sophisticated Greek island – the one jetsetters and celebs escape to.

And it’s those beaches that are the main reason you’re visiting this wonderful Greek island, right?

So it’s only natural you want a hotel on the beach when looking at where to stay in Mykonos. (And don’t worry, some hotels are away from the party action, meaning you can immerse yourself in the scene when you want, but also retreat for quiet beach time too.)

Pssst! Do you love posh hotels? Check out these hotels around the world with private pool suites!

Things to do in Mykonos

Before we get to those fab beach hotels, let’s take a closer look at the island’s appeal and some of the best places to visit in Mykonos.

Can’t wait? Jump now to:
5 Mykonos Hotels on the Beach

You’re bound to stroll about Mykonos town – and inevitably get lost.

In the Little Venice area, balconies of the bars and alfresco restaurants hang out over the sea.

Snag a balcony table, and you look out at the landmark windmills standing watch over the harbor.

Be sure to take one of the colorful old wooden taxi boats to the south coast beaches of Mykonos.

From Ornos Bay, you can putter along for an hour, past rocky cliffs and idyllic coves, to Super Paradise beach – the beach with the wildest reputation. Crowding the outside restaurant bars, the bronzed and beautiful drink champagne and nibble on lobster, as music throbs loudly and Taylor Swift lookalikes in string bikinis dance on tables.

At the other end of the beach, nude and gay sun worshipers swim in crystalline waters.

(Garbed in sun-protecting, long-sleeve shirts and pants for walking the beach, we looked a tad out of place. But as die-hard travel writers, and in the name of research, we of course had to see for ourselves what Super Paradise Beach was all about.)

Anyway, you really can’t go to Mykonos and not check out its famous party beaches.

Down by the harbor, excursion boats leave for half-day guided tours of nearby Delos.

A UNESCO World Heritage Site, the uninhabited island – less than two square miles – is covered with archaeological ruins dating from 300 BC.

Delos was once the most prosperous commercial center in the ancient world.

You can still see the mosaic floors of formerly grand villas and even remains of their toilet rooms (canals under the whole city took waste water out to sea).

5 Mykonos hotels on the beach

Okay, now that you have an idea of what to do in Mykonos, here are 5 of the best Mykonos luxury hotels on the beach.

What started out as a Mykonos holiday home for a Greek architect/designer and his family is now an exquisite boutique hotel.

Perched serenely over Ornos Bay, the Kivotos hotel is unique.

Marble steps wind past garden courtyards, fountains and two swimming pools (where kittens nap on a couch in the sun and budgies chirp in hanging cages) – eventually leading to a private rocky beach with cushioned teak sunbeds.

Housed within white plaster and stone villas, each of the 43 rooms and suites is an individually decorated work of art – more than 2,000 pieces of art in total.

Some suites have private pools.

The Kivotos Signature Suite’s pool has a front wall made of glass.

Breakfast is a feast:

The buffet breakfast, included in the rate, is to be savored.

Settle yourself outside or inside on a Louis IV chair at a marble table with sweeping views of the sapphire blue sea – and you have the perfect start to a five-star fabulous day in Mykonos.

What we loved about Kivotos Hotel, Mykonos:

Traveling with children? Santa Marina is one of the few Mykonos beach hotels that is family-friendly.

In July and August, a free supervised all-day kids program is offered for ages three to 12.

Part of the Luxury Collection, the resort itself is laid out like a Greek village in cubic white washed buildings.

A complimentary shuttle departs for nearby Mykonos town three times a day.

In addition to 101 rooms and suites, there are 13 two- to seven-bedroom villas, each with a kitchen and private pool.

But perhaps the best feature is the long curve of private golden sand beach.

Tucked away in a sheltered cove, the beach provides an unrivaled spot for swimming and lounging.

When hunger strikes, wander over to the resort’s sophisticated Buddha-Bar Beach restaurant.

The specialty is fresh grilled fish (the chef buys seafood from fishing boats that come to the resort’s dock each day).

Go Greek with a fashionably late lunch – and you can watch the setting sun melt like liquid gold into the sea.

What we loved about Santa Marina Resort:

We didn’t personally stay at the following three Mykonos hotels, but from what we’ve read, heard and researched, they come highly recommended!

This intimate boutique Mykonos hotel is quite new – it opened in 2017.

A large covered terrace outside has a sunken pool overlooking the beach, with shaded pool beds for lounging.

By the way, no breakfast buffets here; everything is à la carte. This 5 star Mykonos hotel prides itself on doing everything just right.

Also on the same prime golden sands of Platis Gialos Beach as Branco Mykonos, this hotel is one of the best 4 star hotels in Mykonos – offering good-value, affordable luxury.

The pool has thatch umbrellas for shade, and the outdoor restaurant makes its own wood-oven pizza.

The bustling beach experience and pool music may not be for everyone though.

Walk down outdoor stone stairs to reach this hotel’s private piece of beautiful Psarou Beach, well-protected from the wind.

And when you tire of the beach – how could you! – settle back on a lounger around the two-level infinity pool offering spectacular sea views.

Cubist in design, the whitewashed Grecotel Mykonos Blu has 103 suites and bungalows, some with their own private pools.

Exclusive Eau de Grece toiletries are from Grecotel’s own brand of Cretan organic products (made from olive oil, fennel and sage).

July and August are the busiest months in Mykonos.

In our view, September is the best time to visit Mykonos. The water is still deliciously warm for swimming, and the crowds aren’t as crazy.

How to get to Mykonos

Close to Athens, Mykonos is easy to visit.

From the mainland port of Rafina, high-speed ferries depart daily for Mykonos. Most deluxe Mykonos hotels (including the first two featured here) provide complimentary transportation to and from the ferry dock or airport.

What to pack for your Mykonos trip?

Check out some of the travel clothes and gear we love!

See our first-hand reviews of these luxury Santorini hotels:

Do you dig dreamy travel? We do! We write for leading magazines and newspapers – plus our award-winning blog. Join the journey here! More… 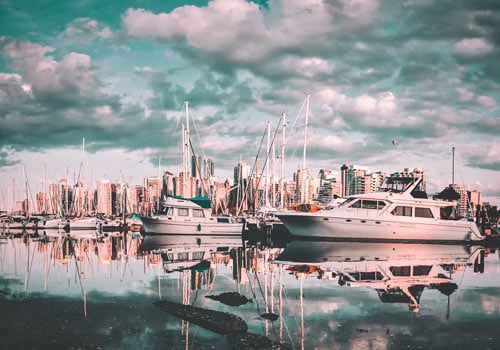