By Janice and George | Updated May 25, 2020
Please only travel when it's safe 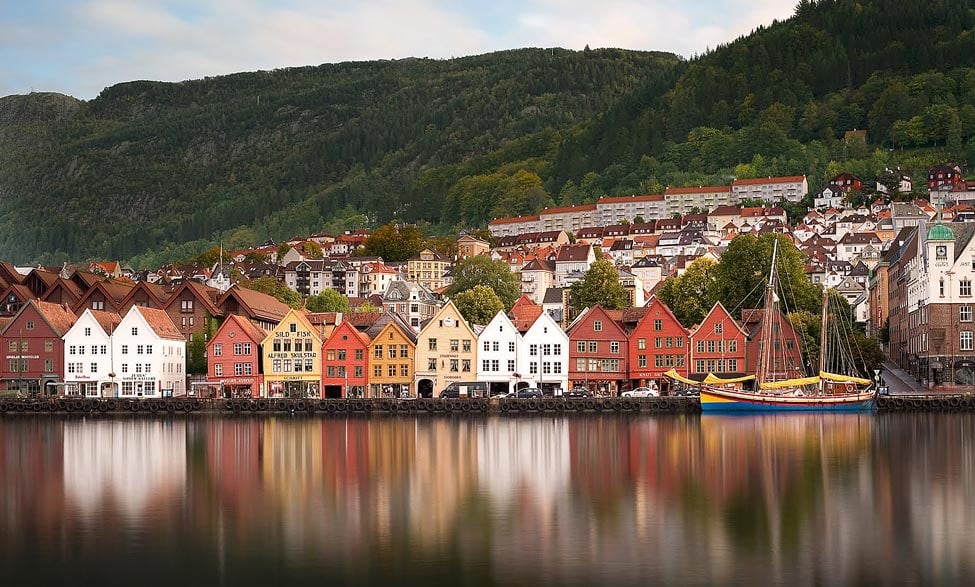 We were boarding the “World’s Best New Cruise Ship,” according to CNN, also hailed by Cruise Critic as the “Best New Ocean Ship.”

Naturally we were curious.

What’s so special about the Viking Star cruise ship to merit such high praise?

The all-veranda staterooms? The TED talks? The spa’s snow grotto?

As we discovered during our Baltic cruise (Viking Homelands itinerary), it’s not just one thing, but a whole lot of things that make the Viking Star ship stand out and a true delight to sail on.

Viking Ocean Cruises shore excursions – one free in each port

How to choose the right cruise?

Cruises come in all shapes and flavors – luxury, adventure, small ship and big.

Is Viking Ocean Cruises right for you? Check out our video below…

Unveiled in 2015, it’s the first ship for Viking Ocean Cruises – the ocean-based brand that Hagen introduced to complement Viking River Cruises and its 60+ river ships.

Purpose-built for destination-focused itineraries, they offer a long list of free inclusions that usually aren’t offered on similarly-priced, ocean-going cruises – like complimentary shore excursions, unlimited WiFi and complimentary wine or beer with lunch and dinner.

Read next: Viking Cruise Bar Menu: Everything You Want to Know!

Naturally, Hagen’s Norwegian heritage is evident throughout the ships.

Take the Scandinavian design of the Viking Star.

The inside is so bathed in natural light, you almost need to put Ray-Bans on!

Huge windows bring in the sunshine, which bounces off white walls and pale timber floors.

In the beautiful two-story Explorer’s Lounge at the bow of the ship, reindeer pelts are draped over comfy couches; leather footstools invite you to put your feet up. Cupboard and drawer handles in the staterooms and stair railings are covered in leather.

And in the Winter Garden, where afternoon tea is served, sculpted blond wood “trees” reach up to a glass ceiling.

Everything is serene and uncluttered.

There’s even a display of museum-quality helmets and other Viking exhibits to add to the sense of place.

Hailing from a cold country, Hagen is probably also the man to thank for the heated bathroom floors in the Viking Cruises staterooms. It was a treat to have warm toes after stepping out of our glass shower.

All staterooms also have private balconies with glass railings – no more balcony envy! Everyone can relish the pleasure of sipping early morning coffee (from their in-room Nespresso machine) on their own balcony as the ship sails into port.

The real king-size beds were a nice surprise too.

The pop-up make-up mirror was also quite nifty – the desk opens up to reveal a backlit mirror lid with a leather-lined drawer with boxes for jewelry and other small items.

Other Viking Star cabin reviews also give high marks for the design of the space.

Our only suggestion (if anyone was to ask) would be to swap out the free soft drink minibar for an extra chest of drawers – you can never have too much storage space on a ship, right?

Make like a Norwegian in the Viking Star spa

Other Nordic influences, like the tradition of alternating hot and cold water therapies, can be found in the thermal Viking Star spa (co-ed).

We’re so used to ships where you have to pay to use the spa pools and sauna (the Aqua Therapy Centre on the Queen Mary 2 costs $40 day). So it took us a while to figure out that the Viking Star spa is free (except for treatments, of course).

“Where are your rubber slippers?” asked a fellow guest when we gingerly padded barefoot into the spa the first time.

Oh, the spa robes, slippers and lockers are also free?

By this time, we were starting to appreciate the “no nickel-and-diming” philosophy onboard.

But, alas, we never did see the real snowflakes falling in the snow grotto that we’d read about.

The inviting pool areas also lured us in.

Facing the windows, cushioned seating areas and teak loungers with soft blankets are popular spots to curl up with a book or nap.

With a retractable roof, the large mid-ship pool deck was built for comfort whether sailing in cooler climes or hotter destinations.

We lucked out with unexpectedly warm weather on our September cruise, and the pool roof was open much of the time.

We even got to splash around in the second glass infinity pool suspended at the stern’s edge – it felt like we could swim right off into the sea.

No matter how attractive a ship is, though, it’s the destinations that matter most to us. The Viking Star ship scores high marks in this department.

On Viking Homelands cruises, the ship sails for 14 nights from Stockholm to Bergen, then does the reverse trip from Bergen to Stockholm, calling in at eight countries.

We were in port every day except one on our two-week cruise. And in each port, passengers, divided into smaller groups, were treated to a free shore excursion.

In Tallinn, Estonia, our free Viking Ocean Cruises excursion was a guided walking tour of the well-preserved medieval Old Town, listening to our guide on Quiet VOX earphones.

In Warnemunde, it was a chartered train ride into Berlin and a panoramic bus tour of the Brandenburg Gate, Reichstag, Checkpoint Charlie and the city’s other main sights, followed by several hours of on-your-own exploration before the train ride (with free German wines) back to the ship.

Our days in port were often long ones (sometimes until 10:00 pm) and included overnights too. If you wanted to shop after your shore excursion or eat dinner ashore, you had time.

For more on the Viking Homelands cruise ports, scroll to the end

Viking Star restaurants (the Scandinavian food is a hit!)

We never felt the urge to try local restaurants ashore – the ship’s food was that good.

For breakfast and lunch, we’d pick and choose from the World Cafe buffet restaurant, sitting alfresco on the open deck at back. Local dishes were often featured.

The splendid Scandinavian seafood lunch followed by made-to-order waffles, berries and cream for dessert is one example.

For dinner, we loved Manfredi’s, one of two specialty restaurants onboard. With a black-and-white tile floor and vintage photos on the walls, it had a real Italian atmosphere.

And everything – from the hand-cut beef tartare to the veal scaloppini to the angel hair pasta with scampi – was excellent. We learned the kitchen makes all its pasta noodles fresh each day.

Added bonus: No cover charge (not often the case with specialty restaurants at sea).

Of all the Viking Ocean Cruises’ menus, the one at the other specialty restaurant, the Chef’s Table, was the most interesting. This five-course set menu revolves around a different theme each night.

It might not appeal to everyone. But we enjoyed being introduced to new tastes and flavors – like the Scandinavian-themed menu of reindeer consommé, lingonberry-infused salmon tartare and a delicious lamb-and-cabbage casserole.

In keeping with Hagen’s desire to make the Viking Star a “thinking man’s cruise,” oodles of interesting travel-related books are scattered about in lounges throughout the ship.

And two to three enrichment lectures are given in the theater each day. We had five guest lecturers on our cruise, including a polar oceanographer, Fulbright scholar/law professor and BBC television journalist – talks on NATO and Russia in the Baltic, as well as the EU’s refugee migration policy, were thought-provoking.

So what does the Viking Star not have?

There’s no casino. (Hagen once said Viking passengers would “rather have a free laundry,” which indeed there is on every deck.)

There’s no hard (or soft) selling of spa products or even liquor – paying for “premium wines” seemed extravagant as our waiters kept pouring complimentary Italian, French and German selections, all very good.

And no children under 16 may sail.

Cruises on the Viking Star are selling quickly. Clearly the word is getting out and others are as curious as we were to see what all the hype is about…

Excited about sailing on the Viking Star or sister ships that do the Viking Homelands trip? Then read our articles on these ports-of-call and shore excursions:

Eidfjord (Flam):  Norway’s Flam Railway: One of the World’s Most Beautiful Train Rides

Berlin:  One Day in Berlin. Crazy? Or Not…

Stockholm:  Things to Do in Gamla Stan (Stockholm’s Old Town)

Stavanger:  The Top 7 Things to Do in Stavanger, Norway

Staying in Bergen before or after your cruise?

We booked the Hotel Havnekontoret and were very happy with our choice.

Read our review: A Luxury Place to Stay on Bergen’s Historic Waterfront

As we mentioned, Viking Star was the first revolutionary ship for the fleet’s ocean-going cruises (2015). Since then, more Viking ships (all more or less identical) have set sail. (Some sister ships also do Viking Homelands cruises.)

The newest Viking cruise ship is Viking Jupiter, which welcomed its first guests in the spring of 2019. And like its sister ship Orion, it boasts a high-tech, 26-seat planetarium (called the Explorer’s Dome).

Two more new ships, Viking Tellus and Viking Venus, are scheduled for delivery in 2021. And we hear more Viking Ocean Cruises’ ships are in the works too.

Review: What it’s Really Like Aboard Viking River Cruises

CruiseDirect promises to offer the lowest rates on cruises. No booking fees either! (But if you cancel, there’s a fee.) Their awards include “North America’s Leading Cruise Travel Agent 2019” (World Travel Awards).

You can book both Viking Ocean Cruises and Viking River Cruises through CruiseDirect.

Pssst! If you make a booking with CruiseDirect through our site, we’ll make a small commission (at no cost to you). Thanks!

A version of our Viking Star review was first published in the North Shore News as “Viking Star Redefines the Oceanic Experience.”

Check out these other posts of ours on cruising!

Discover the Historic Riches of Normandy on a Seine River Cruise

While we cruised on the ship as media guests, this Viking Star review and Viking Homelands cruise review are completely our own, and the cruise line had no influence over them. (We are always free to express our own thoughts, warts and all.)