Emirates Economy Class review: What’s it like to fly Economy on Emirates?

What’s it like to fly long-haul in Emirates Economy Class?

We give you the honest scoop here in our Emirates Economy Class review.

Other Emirates reviews – Safety and service

The world’s fourth largest airline, Emirates flies to some 160 destinations around the world, including Asia, Europe, North America, the Middle East and Africa.

Dubai in the United Arab Emirates (UAE) is the airline’s hub. (There are 7 Emirates in the UAE; Dubai is probably the most well-known.)

On our trip to Africa, we flew Economy on Emirates from Seattle to Dubai, then on to Lusaka, Zambia. (In Lusaka, we flew to Mfuwe for our walking safari in Zambia’s South Luangwa National Park.)

On the return, we flew from Cape Town to Seattle via Dubai, also in Economy.

Both ways, we stayed overnight at Emirates’ Dubai Airport transit hotel in Terminal 3 to break up the long trip – highly recommended!

Read our review: The transit hotel in Dubai Airport is brilliant for a layover!

Emirates currently operates two types of airplanes, the Boeing 777 and the Airbus A380.

If you get stuck in a middle seat in the middle row of four seats, you’re probably going to feel a bit confined.

But, sigh… The more spacious 3-3-3 configuration seems to be a thing of the past, as airlines shift to a 3-4-3 layout in Economy.

For our flight from Seattle, the Emirates gate agent kindly gave us an aisle and a window seat and blocked off the middle seat, so we had three seats between the two of us.

That helped make the 14-½ hour night flight more comfortable. (Of course, if the flight is full, you’re unlikely to get a free middle seat between you.)

The seats offered decent legroom (perhaps 32 inches?) and reclined quite a bit.

Everyone has to recline though, or you feel squished with the seat in front of you right in your face.

Emirates has three different layouts for their 777-300ERs (see here).

For the best seats on Emirates’ 777-300ER planes (latest version), see SeatGuru; you can also check the other two layouts on SeatGuru too.

The interior of the planes looked as if they had been upgraded – the bathrooms had wooden cupboards and accents.

When the cabin lights were turned off, twinkling stars shone on the ceiling, and the soft “mood” lighting turned from pink to mauve and aqua hues.

Everyone in Economy Class was given red-and-white amenity bags with socks, eye masks, ear plugs and toothbrush/toothpaste.

And we received a large-sized blanket and pillow.

We found our meals quite tasty.

For example, on the night flight from Seattle to Dubai, the Emirates economy menu offered a choice for the dinner entrée (we chose lamb kofta with rice). A fresh salad (no limp brown leaves) accompanied that.

We also had three choices of red wines – two French and one Spanish. Cutlery was metal; we didn’t have to saw away with plastic knives.

Mid-flight, a pizza service was offered.

Before arriving in Dubai, we received a hot egg-and-cheese omelette.

On the next leg from Dubai to Lusaka (6-½ hours), we had another breakfast – this time, a cold egg-salad croissant and fruit salad for a light breakfast.

Later, on the same flight, we were offered a hot lunch (a choice of beef in mushroom sauce with herbed polenta and stir-fried tomatoes, or creole chicken in tomato sauce with steamed rice and vegetables), accompanied by potato salad with green beans.

We give high marks to Emirates ICE entertainment system, which the airline is quite proud of. (ICE stands for information, communication and entertainment.)

You can watch the news, send emails and watch movies.

It’s apparently the best in the world, with 4,000 channels, including some 1,000 movies. In the Skytrax “World Airline Awards,” Emirates has been named the airline with the best inflight entertainment for the past 15 years.

We liked the big screens (almost as wide as the seat back in front) and big cushioned earphones (not the little buds that fall out of your ears).

Unfortunately, the sound streaming into one ear was broken for both of us on one of our flights – so we had to listen to our blockbusters lopsidedly.

As an Economy passenger, you can only take one piece of carry-on baggage onboard.

When we flew Qatar Airways, we also discovered (to our chagrin) that we couldn’t take the same rollaways and backpacks allowed on North American airlines. There’s enough room in the overhead bins and under the seats, so we don’t really understand why these airlines don’t have the same standards.

In Economy, you can check one or two bags (depending on the fare), no heavier than 50 pounds (23 kg) each.

Emirates has a good reputation.

It ranks among the world’s 20 safest airlines.

As for service and comfort, it has a 4-star airline rating (according to SkyTrax) for things like food and seats – keeping company with Air France, Air Canada, Air New Zealand, British Airways and other major airlines, which also have 4-star ratings.

We were impressed with our Emirates Airlines Economy Class flights.

For the most part, it was a comfortable experience (in as much as flying economy can be called “comfortable”).

Our return flight connections are where we downgrade our Emirates review.

We had a seriously long (9+ hour) layover in Seattle on our return home.

We hadn’t planned on that. When we booked our tickets, our Seattle layover was going to be 3 hours (before the final 30-minute hop home to Victoria, Canada).

Our flights were changed on us unfortunately, after we’d booked and paid – resulting in this 9+ hour layover – and Emirates wouldn’t put us on an earlier flight home from Seattle because that was a non-partner airline.

Needless to say, we were very unhappy about this…

Pssst! If you make a booking or purchase through our site, we may earn a small commission (at no cost to you). Thanks!

Was this review helpful? Then please pin to your Pinterest board!

We paid full regular fares for our flights, and we haven’t been paid to write this Emirates economy review. 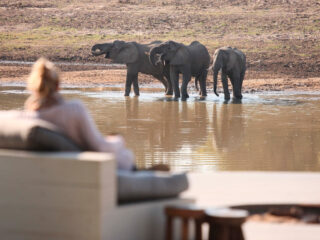 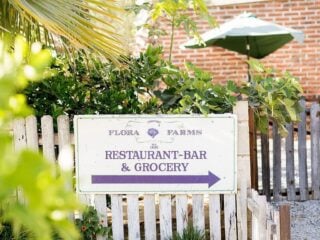 If you're going to UAE, then you should have a look at all 7 Emirates of the UAE!

Wow... thank you for this review. I found it helpful. I am traveling in some days on an Emirates Economy class flight and this is informative. Thank you! And thanks for visiting Zambia.. That's my home.. And that is where I am traveling to. Alright guys. Thank you ☺

Well, thank you for letting us know you found our review helpful! It's always nice to hear from readers :-). And Zambia? You can see we were so taken by the country that we had to visit it twice... Hmmm. Wonder if there's a third visit in our future? Anyway, have a good trip and visit :-).

Went from London to Kochi [India] last January on a return flight with my partner. Both my partner and I thought Emirates offered a really good all round service. We found the seating/food/entertainment all to be of a high standard, considering we were travelling economy. My special diet requirements were adequately catered for, along with the selection of complimentary drinks. All in all a wonderful start to my vacation. I would have given 4 stars, but will lose half a star as I found some of the cabin crew to be a little poker faced, or to put it another way. MISERABLE.

Thanks for letting us know about your good Emirates economy flight experience! Sounds like you just wished the service had been delivered with more smiles :-).

My name is Neary, my flight on 22th January 2020, from Bangkok Thailand to Phnom Penh, Cambodia.

The plane is absolutely nice and comfortable but my flight experience was bad, the flight attendants seem so rude! They treat us like we are lower than them, while we bought tickets by our own money, we didn’t ask for free! When they gave us the food they didn’t say anything nor smile but just gave the food and gave us with the strong facial expressions.

Another thing is before landing 15 minutes, they came and grabbed all the headsets from everyone without asking politely. This is the first time I experienced something like that on board. I feel oh my god! What wrong??? It’s too funny and I have flown many times but no one treat us like that.

I hope you can correct with this kind of issues because at that day not only me but other passengers also mentioned about that. I just hope all those flight attendants understand that we purchase the flight tickets by our own money, we didn’t ask for free so please do your work politely. Thank you.

Sorry to hear you felt the flight attendants were rude. Perhaps they were just very busy and trying to get their job done?

I hate to say this but I come from India and have traveled quite a few airlines to travel Europe, Turkey, Middle east and US and can say with certainty that Emirates have gone from good-to-bad-to-worst... They have become ruthless when it comes to seating, baggage policies, food, and alterations to the ticket dates. For example, my 5 year old son's name wasn't spelled correctly on the ticket and I had to cancel my flight altogether because they wouldn't make the correction to my son’s name because it “exceeds more than three characters.” They wanted me to re-purchase the same seat for almost double the price.

This is just not one incident - I took a break in Dubai and they made me pay for my entire luggage all over costing me more than $500 in all for ‘one extra suitcase’. Besides the fact that they check your hand carry for exact weight. Agents at the time of boarding took away my hand carry. If you exceed even by a pound or two, they make you pay for it as my friend ended up buying for it, besides buying an extra bag…

Sorry to hear about your unhappiness with the airline!

We've heard of other cases with other airlines about how your name on the ticket must be spelled correctly -- or you could be denied boarding. Seems to be a universal rule. So it's a word of caution to always check your ticket after issue and to call the airline immediately if you notice any discrepancies.

And, yes, Emirates is very strict with the weight limit for the carry-on bag. And their weight limit is way less than other major airlines like British Airways, Air Canada, etc. We were caught by this too, so we sympathize :-). Again, a cautionary note to always check the baggage limits before flying -- and don't assume all airlines have the same limits.

Ahhh, the joys of flying these days :-).