You may initially come to Puerto Vallarta for a beach escape.

But its arts and sculpture scene will tempt you away from your beach chair!

In particular, the Puerto Vallarta Malecon sculptures will inspire you to walk along PV’s beautiful promenade by the sea – more than once, we expect.

Unlike some other resort destinations in Mexico, Puerto Vallarta is a living breathing city (population about 250,000) with a cultural Old Town.

It’s delightful, what with its red tile roofs and charmingly unkempt Mediterranean-like ambience.

There are loads of great art galleries, murals and public art pieces. (Puerto Vallarta has many top restaurants too.) At least 35,000 Canadian and American ex-pats live here.

In short, PV (as the town is affectionately called) has become a mecca for art in recent years, luring artists, art lovers, art collectors and visitors who just like seeing art.

Let’s start with those iconic Puerto Vallarta sculptures on the Malecon.

One of the top tourist attractions in Puerto Vallarta, the Malecon is a pedestrian-only promenade that stretches for more than 20 blocks along the seafront in the downtown area.

It was spruced up extensively in 2011, and some 300 foxtail palms were planted, providing welcome shade.

Indeed, strolling the Malecon (and admiring the sculptures) is now one of the best things to do in Mexico.

Be sure to look down as you walk along the Puerto Vallarta Malecon. You’ll notice the mosaic pavement was created using traditional river stone techniques by local Huichol artists. It’s a work of art too!

As for the thought-provoking sculptures, most are by local and Mexican sculptors, but there are some from international artists as well.

Originally there were 10 statues along the Malecon, but new ones have since been added.

See this map showing the location of the sculptures today.

Here are some of our favorite Puerto Vallarta Malecon statues.

Beginning at the north end of the Malecon, in front of the Hotel Rosita, the first sculpture is “The Millenia” (Los Milenios) by Mathis Lidice.

A tall, narrow, gently-curving piece, it represents time – from the beginning of life to hope for a peaceful future.

Do you see Charlemagne wielding a sword? And the Aztec poet-king Nezahualcoyotl? The woman at the top is releasing a dove (symbolizing peace) and stretching her arms out to the future. (Sorry, we don’t have picture!)

A couple of sculptures along, you come to this bronze sculpture by Jose Ramiz Barquet. It’s hauntingly beautiful, don’t you think?

“La Nostalgia” depicts a couple sitting side-by-side – Barquet’s tribute to his wife Nelly Galvan Duque, a painter. It takes on more meaning when you know the story behind it.

When Barquet and Nelly were teenagers, they fell in love and planned to get married. But their parents disapproved of the match. They went their separate ways and married other people (though both relationships ended in divorce).

After a 27-year absence, they happened to meet again at a flower market.

At the spot where this sculpture now rests, they spoke of their love for each other and the life they could have had together – sparking the idea that Barquet would sculpt a symbol of this nostalgia.

The story has a happy ending. Barquet and Nelly married each other and were together for 33 years until Barquet’s death. He died at 90, still loving Nelly.

Carlos Espino named his sculpture “Triton and Mermaid” but it’s also referred to as “Neptune and the Nereid.”

Espino, a Mexican sculptor, was keenly interested in Greek and Roman mythology.

In this sculpture, Triton (son of the Greek sea god Poseidon) is reaching out to Amphitrite, his mother and goddess of the sea.

4) In Search of Reason

One of the most popular Puerto Vallarta Malecon sculptures is “In Search of Reason” by well-known Mexican artist, Sergio Bustamante.

It features two balloon-headed, child-like figures climbing a 60-foot ladder to the sky. At the bottom, there’s a larger figure standing on the ground, mouth wide open and arms outstretched.

Are these two children seeking to discover life and all its mysteries? Is the mother on the ground beseeching them to be careful and come back down? Or is she urging them to pursue their dreams?

Try to resist climbing the ladder to get your picture taken!

Bustamente apparently wanted people to interact with his “In Search of Reason” sculpture – so many tourists have indeed climbed up to get photos taken of them on the ladder.

“The Seahorse” or “The Boy on the Seahorse” statue in Puerto Vallarta is found between the arches and the old lighthouse. It was one of the first sculptures to be placed on the Malecon.

The statue you see today isn’t the original though.

Back in 1960, 18-year-old Rafael Zamarripa won Mexico’s national sculpture prize. He created a lovely seahorse statue which was placed on a pile of rocks (Las Pilatas) on Los Muertos Beach.

It was washed away by waves in a storm in 1976, however. Zamarripa (a sculptor, painter and choreographer) was later asked to build another seahorse statue – hence the 10-foot-high sculpture that now graces the Malecon.

And the original seahorse that was knocked off its perch? It was eventually found and restored and is now back on Los Muertos Beach.

So today, there are two seahorse statues in Puerto Vallarta.

As mentioned, there are more sculptures on the Malecon – we’ve just described some above. Here’s the list of all of the sculptures and their creators:

Removed and not yet placed back on the Malecon:

If you visit PV between November and April, you can join a Malecon sculpture walking tour. And trust us, it’s one of the best free things to do in Puerto Vallarta in winter!

The weekly tour is led by Gary Thompson, owner of Galeria Pacifico, on Tuesday mornings.

With more than 30 years of experience in the Puerto Vallarta art scene, Thompson knows many of the sculptors personally and explains each of their works.

He shares stories about the artists’ lives, love affairs and scandals, along with information about why they created their sculptures.

We were spellbound! Thompson really breathes life into the absorbing sculptures.

Where to join this free Puerto Vallarta walking tour:

Just show up at The Millennia sculpture on the Malecon on Tuesday morning before 9:30 am. The tours are two hours long. See here for details.

As well as the bronze sculptures, you’ll see many large and wonderful sand sculptures in the sand below the Malecon too.

These are not like the sand castles you built as a child. No, these are full-on sand masterpieces!

Each sculpture lasts perhaps 20 days, but new ones are constantly being built.

Since the first recorded art exhibition was held in PV in 1952, artists have painted their creations and galleries have sprung up in this tropical city.

Today, PV boasts more art galleries than any other coastal destination in Mexico. And browsing them is another of the best things to do in Puerto Vallarta!

Many galleries focus on local art.

We particularly like Galeria Corsica in an old hacienda-style villa.

You might spot a bronze flying horse statue, or a drawing of a lonely man by Jose Luis Cuevas, one of Mexico’s most influential artists.

What caught our eye were whimsical bronze statues of a chubby little man called “Timoteo.”

He’d look good in our home, we thought. But, gulp, the price tag quickly nixed that idea.

Then there’s the Genius of Paco, which opened in 2009. It promotes PV’s colorful naïf art – traditional paintings of village and beach scenes done in a child-like style.

At other galleries, you’ll find handmade clay vases and plates from the Mexican town of Mata Ortiz (famous for its sophisticated pottery) and intricately beaded tapestries, masks and sashes from the local Huichol Indian people.

A great way to take in the art galleries is the free self-guided Art Walk.

With our Art Walk map in hand, we thoroughly enjoyed strolling the cobblestone streets of Puerto Vallarta at dusk, popping into different eclectic art galleries.

More than a dozen art galleries open late so you can wander in. Along with paintings, you see sculptures, fine ceramics, high-quality jewelry, glass work, collectible posters and all sorts of other interesting artistic creations.

Admire the art, meet the artists and gallery owners, and enjoy complimentary wine and appetizers.

So now you know some of the most interesting things to see in Puerto Vallarta! Getting back to those sculptures, do you have a favorite? You can let us know in the Comments below.

Where to stay in PV?

See our reviews of these 5 beautiful boutique hotels in Puerto Vallarta – you’ll love them!

Don’t miss! See our Ultimate Mexico Travel Guide! (We’ve traveled to Mexico dozens of times and have written tons about the country.)

55 Amazing things to do in Mexico
← Read Last Post 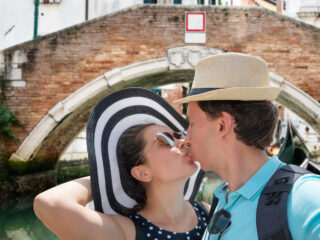 7 Most romantic hotels in Venice, Italy, for all budgets
Read Next Post →
Click here to cancel reply.

The pictures are lovely! When traveling to Mexico, I'm likely to choose D.F., Puebla, or Guadalajara (next on my list), and skip popular resort towns. However, it seems like PV has more going for it than the beach. The food sounds interesting for sure!

Thanks for the kind words on our photos. Yes, there's more to PV than the beach...