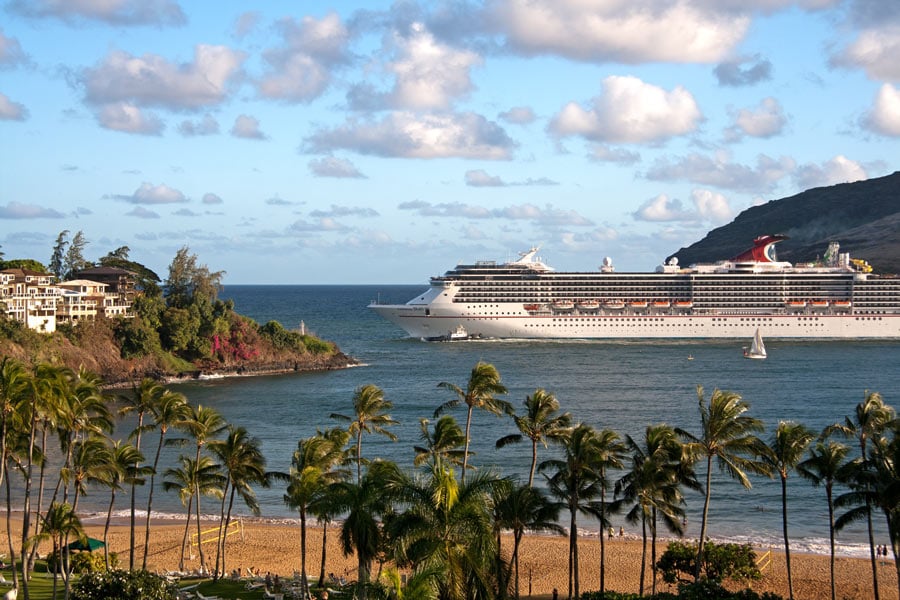 More cosmopolitan and developed than Fiji and French Polynesia, the Hawaiian islands have something for everyone. There are more fun things for kids to do too, so Hawaii is a better option than the South Pacific for a family cruise.

The top attraction in Honolulu – and most poignant – is Pearl Harbor, where a film shows the 1941 attack and a boat trip takes you to the wreck of the USS Arizona battleship.

Fancy catching a wave instead? Ever since Duke Kahanamoku and fellow “Waikiki Beach Boys” introduced surfing to the world in the 1920’s, Waikiki Beach has been known as one of the best spots in Hawaii to learn to surf.

Or you could surf the stores at Ala Moana, the world’s largest outdoor shopping center.

In fact, because there are so many kid-friendly things to do in Honolulu and beyond, Oahu is perhaps the best Hawaiian island for families.

Hot stuff on the Big Island of Hawaii

When your Hawaii cruise hits the Big Island of Hawaii, you must visit Volcanoes National Park.

Standing at the rim of the Kilauea Caldera, you inevitably see clouds of smoke and steam spewing out of the enormous (over two miles in diameter) grey-black depression. After sunset, a vivid red glow illuminates the plume billowing into the night sky.

The moon-like landscape is constantly changing because the volcano is active, so you might even see red lava flowing when you visit.

Kids (and adults) also like walking through the cool dark tunnel of the Thurston Lava Tube – it feels like you’re inside the belly of some giant prehistoric monster.

The garden island of Kauai

Blooming with bougainvillea and bird-of-paradise flowers, Kauai is nicknamed the “garden isle.” And wandering around the Allerton and McBryde Gardens is a delightful way to spend a few hours on the island.

Kauai is also the place for a helicopter ride over jungle scenery where King Kong and Jurassic Park were filmed (choose a “no doors” chopper for great pics).

What to do in Maui

Maui is best for whale watching.

In winter, thousands of humpbacks migrate from Alaska to Maui to mate and give birth. You’re pretty well guaranteed to see them on a whale watching tour – they may even breach just feet away from you!

Some boats have hydrophones so you can listen to their whale songs too.

There’s some cool whale watching in Cabo San Lucas too – read next!

The Hawaiian islands also have dream courses for golfers (the PGA and LPGA host many events here), Hawaiian luaus (try the pit-roasted suckling) and beaches galore.

Family-friendly cruises in Hawaii are offered on these cruise lines:

Ready to book your cruise?

CruiseDirect promises to offer the lowest rates on cruises. No booking fees either! (But if you cancel, there’s a fee.) Their awards include “North America’s Leading Cruise Travel Agent 2019” (World Travel Awards).

You can book all these Hawaii cruises through CruiseDirect.

Pssst! If you make a booking with CruiseDirect through our site, we’ll make a small commission (at no cost to you). Thanks!

This post on Hawaii cruises for families is one of a 3-part series on cruising the Pacific Islands. Read the other two posts below!

Cruising French Polynesia: As Romantic as it Gets