Home / Cruises / Voyages to Antiquity cruise in the Aegean 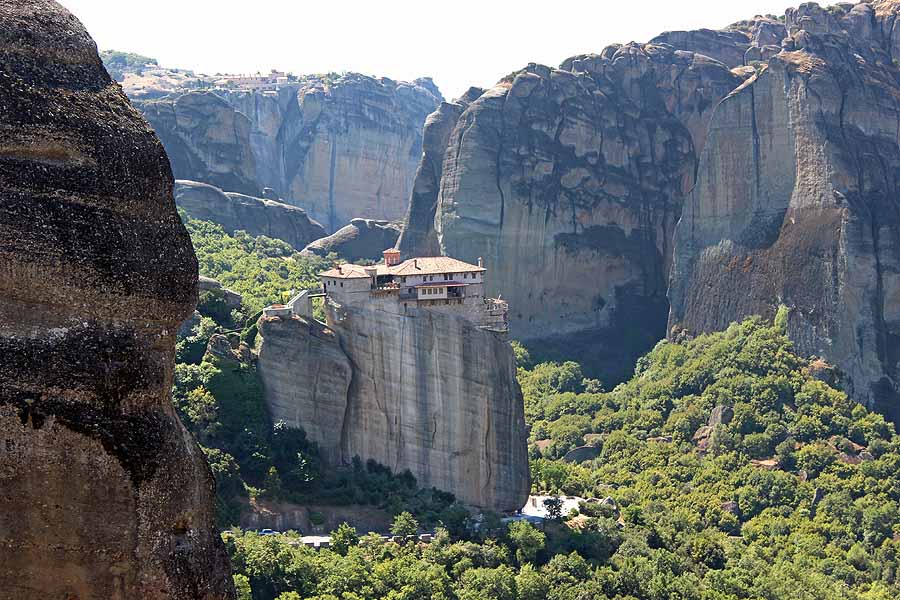 If we were 17th century Venetians, we’d have to cross a drawbridge (or wade through the sea) to enter Monemvasia. Today a modern causeway links the medieval fortress town, built atop a steep rock islet, with the Greek Peloponnese mainland. Yet Monemvasia itself still evokes the past – a web of car-free cobblestone paths, wide enough just for a donkey pulling a wagon, winds past gold-tinged houses that date back to the Byzantine, Venetian and Ottoman empires.

On a previous cruise we took on the “Aegean Odyssey,” swells prevented our planned stop at Monemvasia.

This time – sailing again on the “Aegean Odyssey” in September – the sea gods smiled on us and the ship was able to anchor offshore. And so we could admire the gold-leaf icons in the town’s historic Greek Orthodox churches, sample the famous sweet Malmsey wine that originated here, and…. Intrigued?

Monemvasia is one reason we chose this particular Voyages to Antiquity cruise itinerary from Istanbul to Athens. We wanted to explore off-the-beaten-path Greek islands – like Monemvasia – and lesser known Mediterranean archaeological sites.

As well as Monemvasia, we visited the following ports of call:

This famous WW I site on Turkish soil is where 500,000 soldiers died in a matter of nine months (from grenade wounds, bayonet fighting and disease).

Mustafa Kemal Ataturk, a young Turkish commander, first made a name for himself here by addressing his soldiers: “I command you not to fight, but to die” (which they did, defending their country against the ill-fated invasion by young Aussies and New Zealanders). Atatturk went on to become the “Father of Turkey.”

It was sad and very moving to see the trenches (the Turkish trench line was only yards away from the Allied trench line) and walk past the dead soldiers’ gravestones.

Kavala and the ancient ruins of Philippi:

Philippi is all about gold, wine, murder, mayhem, Alexander the Great and St. Paul. See our earlier post on “Soaking up history at the ancient ruins Philippi ruins.”

A peninsula with steep cliffs climbing up from the sea, Mount Athos is dominated by a tall mountain in the middle, with clouds hovering above the top. At one time, it was home to some 40 monasteries. Today, there are 20 monasteries on the UNESCO World Heritage Site, which is an autonomous Greek state (like the Vatican).

We didn’t actually set foot on Mount Athos, but cruised slowly by (boats have to keep a distance of over 1,500 feet away).

To visit, you have to request permission from your own consulate, get recommendations about your good character and supply reasons why you want to visit – and then you can only visit Mount Athos for three days. But no women are ever permitted. In fact – get this – while the self-sustaining monasteries have farms, female animals are prohibited.

You may have seen photos of Meteora (like the lead photo in this post). Starting in the 11th century, several remarkable Byzantine monasteries and nunneries were built in Meteora – which means “suspended in air” – atop towering sandstone rock pillars over 1,200 feet high. Monks and nuns still live here today.

Fascinating, yes. But we had to jostle with hundreds upon hundreds of tourists all wanting to eye this popular site – which detracted from our experience. It would be better to visit Meteora during the off-season! (Maybe late October or even November?)

The second largest city in Greece (after Athens), Thessaloniki was founded in 315 B.C.

We found it a pleasant place to stroll about, with a picturesque seaside promenade, lots of outdoor cafes and ruins around which the city is built. The historic center is the kind of place where apartments above shops sport balconies decorated with potted plants and birdcages with yellow budgies.

Remember Mama Mia with Meryl Streep? It was filmed on this hilly pine-covered island (and nearby Skopelos).

Unfortunately for us, it rained during our visit to Skiathos, so we didn’t check out its supposedly stunning beaches, but sploshed about window-shopping instead.

Named after Aphrodite, the Greek goddess of love, Aphrodisias is a little like Ephesus in Turkey. It prospered from the 1st century B.C. through to the 4th century A.D. and was known for its beautiful marble sculptures, which still amaze visitors today.

The now uninhabited Greek island of Delos is one vast archaeological site. You can see beautiful mosaic tile floors in the houses of the wealthy who lived here, like the lion head in the House of Dionysos.

Nearby Mykonos is the hedonistic island of fun and parties. Our afternoon was spent poking about the narrow white streets of the pretty town, followed by a swim at Ornos beach.

We had previously toured Crete’s Palace of Knossos (the ancient capital of the mythical King Minos, built about 1,900 B.C.). So this time, we explored Rethymnon’s delightful Venetian-Ottoman quarter – a maze of narrow flagstone streets, graceful wood-balconied houses and ornate Venetian monuments – then hit the beach for a swim.

From Nauplia, we drove to the ancient archaeological city of Mycenae (the center of the highly developed Mycenaen civilization which Homer wrote about in the Iliad around 850 B.C.) to learn more about King Agamemnon and see his tomb.

Agamemnon was buried with all his gold treasures. But there was no gold to be seen – the treasure had already been looted when Heinrich Schliemann first excavated the site in 1874. (Schliemann was the person who discovered Troy, proving that Homer’s heroic epic poems were rooted in reality).

All that remains today inside Agamemnon’s huge, rounded limestone tomb (which would have looked like a grassy mound centuries ago) is black soot clinging to the walls, remnants of the cooking fires lit by medieval occupants when they lived here.

About Voyages to Antiquity cruises:

A unique attraction of Voyages to Antiquity is that its Europe and Med sailings include 2-night pre- and/or post-cruise deluxe hotel stays.

Have you taken a Greek island cruise?